Having struggled to design and build my own 2-pole electric motor I purchased four motor kits from Kelvin. The first motor I constructed was one that used a magnetic switch, there are no brushes used in this motor. Also somewhat different is that there are four magnets mounted to a disk that the motor shaft goes through in the center, two coils are outside of this. To connect and disconnect the electrical connection is a tiny magnetic switch. The magnetism of the permanent magnets closes the magnetic switch as it comes near. A tiny arc of electricity is visible as in the center of the switch as the motor runs. It sounds good in theory but I wondered why five of the magnetic switches were included, the first one only lasted a few minutes of running so now I know why. 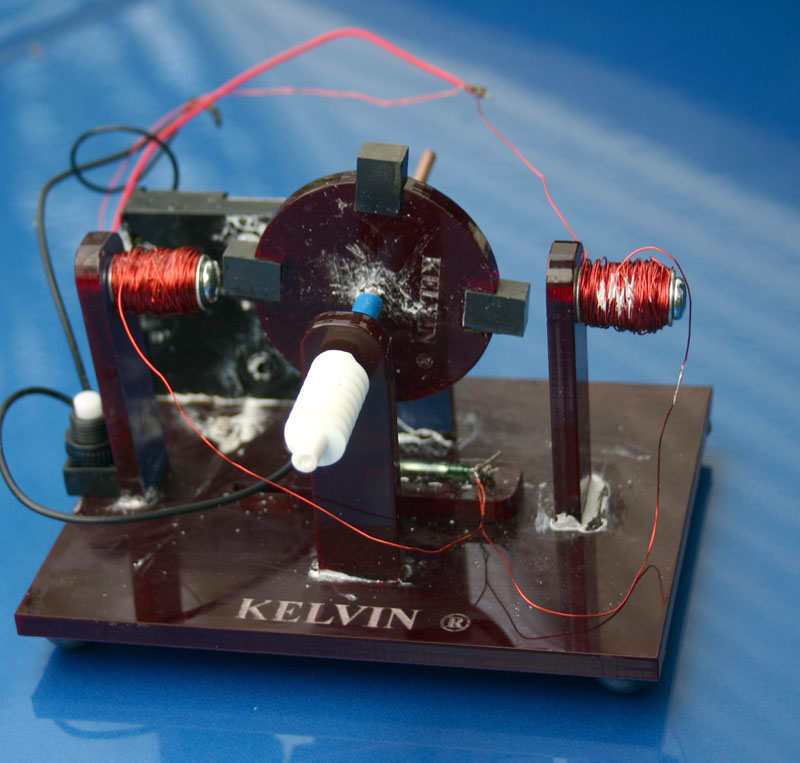 What impressed me with this kit was that it was created from thick plastic, this makes for a good bearing surface for the motor shaft to run through and the structure is very rigid. Plastic parts are glued together but the instructions did not specify the type of glue to use. I used CA and then an accelerator spray to set the bond which made a mess of the motor appearance.


One thing I learned is that in the 2-pole motor I had built most likely I did not wind anywhere near enough wire on the coils.  When I unwound the wire in the kit I had wire strung out all over the house, what a mess. The total wire length must have been at least 50 feet. I had also been trying to find a "soft iron" core but this motor uses a couple of small bolts for the core.


Directions for the motor could be better but I did get it working. The magnetic switch is on a slider plate so you can adjust the position for best performance. Sometimes the motor would quit running and sometimes it took a few tries to get it started. Then it would not start at all so I replaced the magnetic switch. I do not see this motor listed on the Kelvin website today, so not sure what that means.

Look forward to more reports on the other motors I purchased.


Posted by Scienceguyorg at 7:59 AM