Newton's Laws and the Hybrid Car

I think the biggest reason I purchased a hybrid car was my fascination with the engineering that gives the car such good efficiency. Understanding the basic physics of the car possibly might increase the mpg that your car obtains, this past summer I had reached a 53.5 mpg average. The following post is my attempt to relate some basic physics to how the hybrid car functions. If there are great inaccuracies let me know.

This means that a car that is not moving will take a force to get it moving, this normally is provided by converting chemical energy into mechanical energy by the burning of gasoline in an internal combustion engine. Explosions in the cylinders  of the engine rotate a crankshaft that connects to gears and shafts resulting the in drive wheels of the car rotating which moves the car.

In the hybrid car when it is coasting or braking, the internal combustion engine is turned off and the kinetic energy is converted to electrical energy and stored in batteries. This can be seen in the Energy Monitor display in a Prius hybrid car, the dashed line with the arrow points from the front wheels to the battery.

Accelerating from a Stop in a Hybrid Car

Thinking of Newton’s First Law again when accelerating the hybrid car, when you gently press on the accelerator pedal the car will start moving with the electric motor. Some of the electricity supplied from the battery may have come from what was generated in the coast and the process of stopping before the car came to rest. 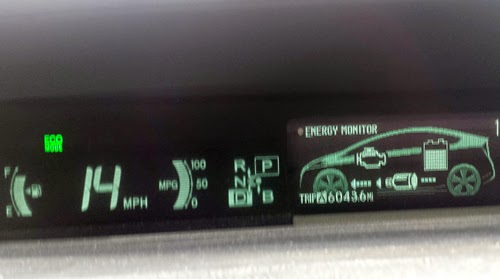 In the Energy Monitor diagram above the arrow points from the battery through the electric motor and towards the front wheels.

In this diagram the brown arrows indicate the internal combustion engine is helping to power the car and charge the battery.

Posted by Scienceguyorg at 9:10 AM