Gary has been actively researching the record to get better data and an email was forwarded to the Free Flight Mailing from a chief designer on the project. From the email which I will post below it will be apparent that the record was even more impressive in that the launch height was only 22 feet not 30 feet. It is also interesting to see that model airplane prototypes were used.

"Actually, the platform was not 30 ft.  In Long Beach it was about 20 ft above the water (from photo interpretation, and when we flew.  Tide went down by a foot during the event).  The Long Beach rules this year gave a 10 ft height over the platform limit, so we had a 2 ft high cart, so launched at about 22 ft.  The record from Germany last year appears to have had a 27 ft high platform, and they had an 18 ft high cart, so launched from 45 ft, about double what we had.  I have not tried to estimate the overall height for the B-25 from Minneapolis in 2010, but they had a 15 ft high cart, and the platform seems to be higher than 20 ft.  Anyway, we more than doubled the L/D of the previous record holder.  I dont know the wind from the prior 2 records but we had some headwind.. great for launching but not for glide range.

Note, a big limit on the performance of these "craft" (to use the Red Bull term.. I think its more as in "arts and crafts"  rather than "aircraft" ;-)  ) is that we had a 28 ft wingspan limit.  Combine that with the speed you can get by pushing and running on the platform (15 mph is a good push speed, we added about 5 mph to that with headwind and pilot running, so about 20 mph airspeed) and if you dont want to dive to gain more speed, you are stuck in a situation with high span loading (or low aspect ratio if you prefer), and lots of induced drag.

Our glider weight was 85 lbs (heavy, but quick and cheap and LOTS of structure margin), with a 130 lb pilot, so 215 total flying weight.  Projected wing area was 196 sq ft.

Anyway, with that flight condition, without the winglets, the lift to INDUCED drag ratio is only 12:1 or so.  Winglets and taking advantage of ground effect helped a lot.

We did look at diving to get to a higher airspeed, which would have given better L/D  (my estimate for our glider was best L/D speed was about 26 mph), but when you look at the altitude loss to get the speed, its not a net advantage, particularly with the low platform.  And then the flight dynamics ( we did some 3 degree of freedom simulations) mean that the bottom of the pullout is double the altitude loss compared to what you need to get the acceleration, AND its some very critical piloting for something you dont get to practice.  So, we decided to keep it simple and get enough wing area to just fly level off the platform..  a very fortunate decision since the platform was way lower than they said it would be! Hey.. we won the dance part of it also..  ;-)    Given all the constraints, I would say we had a "real" glider!  Yes, given more time (2 months from when the rules came out until the flight) and money, we could have done somewhat better, but the low launch height, low speed launch and span limit really constrain what you can do for performance.  And you have to question how much you WANT to put into it when you know its going into a dumpster right after the flight.  We know we could do a lot better if we did it again... but you really have to ask if that should be the purpose of the event.. We did a small RC model (with weight shift control for pitch) to test overall handling.  Certainly good for morale!

And, of course, we also tested the actual plane the week before the event.  Just very short hops on a hang glider training hill to check trim and get used to it, since we did not want to risk damaging it too much... but we did learn a LOT, made some improvements to the plane and cart etc.  The main pilot (Laura), backup pilot (Marshall) and our test pilot (and my co-designer) Zach all flew it.


Posted by Scienceguyorg at 6:19 AM No comments:

I noticed in national news that a new gliding length record had been established in the wacky Flutag event sponsored by Red Bull. A human pilots a glider off a large deck 30 feet over the water while team mates push the glider on top of the deck as far as possible. The winning team were engineers calling themselves the Chicken Whisperers with a glide of 258 feet.


Gary Hinze had created a lab exercise for my website Simple Gliders in the Science and Mathematics Curriculum which was designed for simple model gliders but I thought with enough data the calculations could be applied to the Flutag record.

From what was given; height 30 feet, length 258 feet, duration around 10 seconds from watching video. A weight of 220 pounds might be used to be well under the 400 pound limit, as a weight close to that was found from one source.

So try to come up with calculations for glide ratio, velocity, L/D, etc.

Posted by Scienceguyorg at 11:07 AM No comments:

I was helping a science teacher friend yesterday with a lab using rubber powered free flight model airplanes flown indoors. The airplanes had been built already but I had helped with that in the past. The plane used was the Denny Dart II which uses small rubber bands to hold on the wing. This is nice for moving the wing to change the Center of Gravity or swaping a new wing in when one is broken. 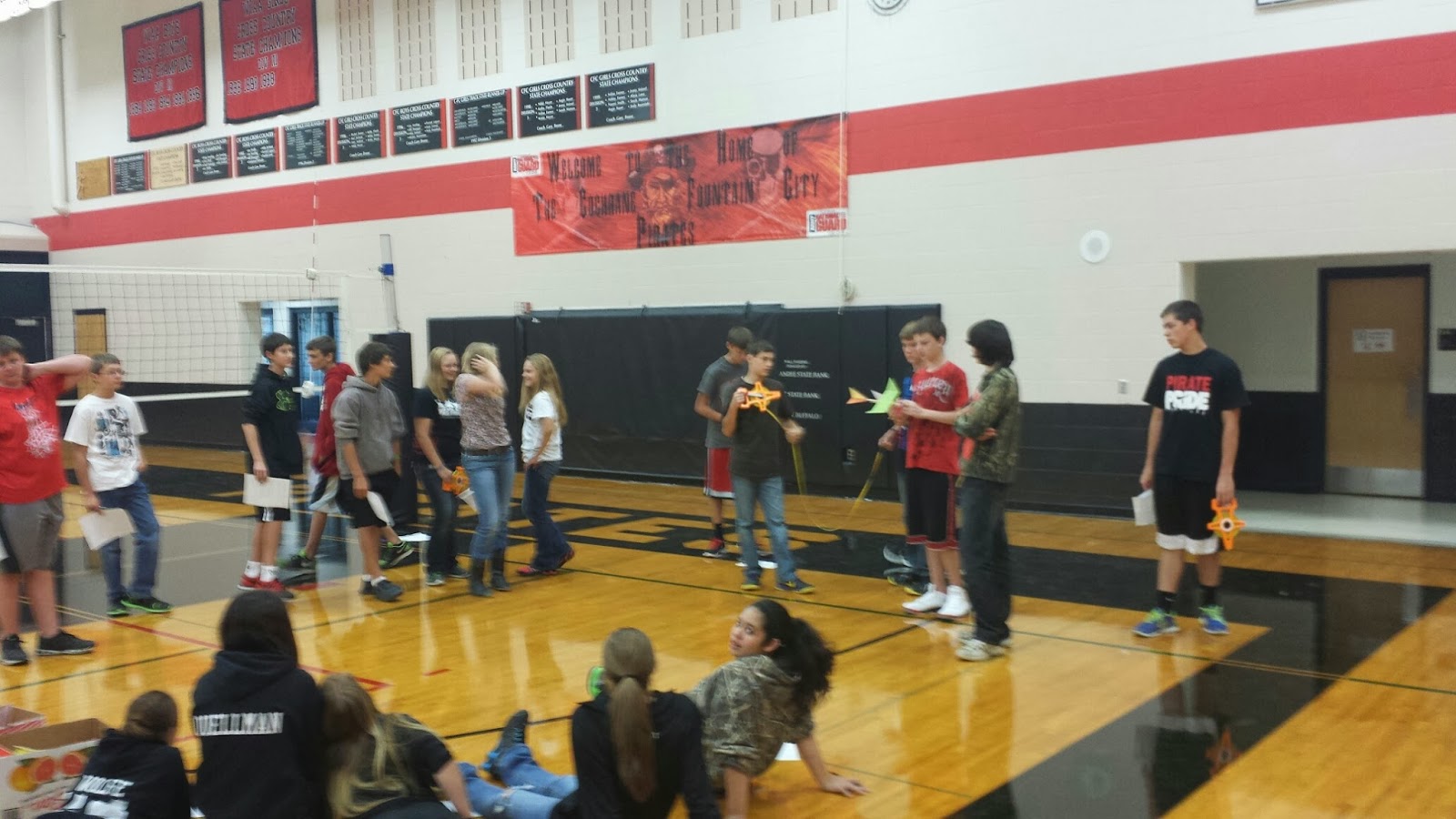 The first session did not appear to go the best and class times are so short that everything needs to go like clockwork. For the next session I flew my IMP model plane from Easy Built which is a really stable flying plane indoors or outdoors. It did seem to help the students to see what a good flight should look like. 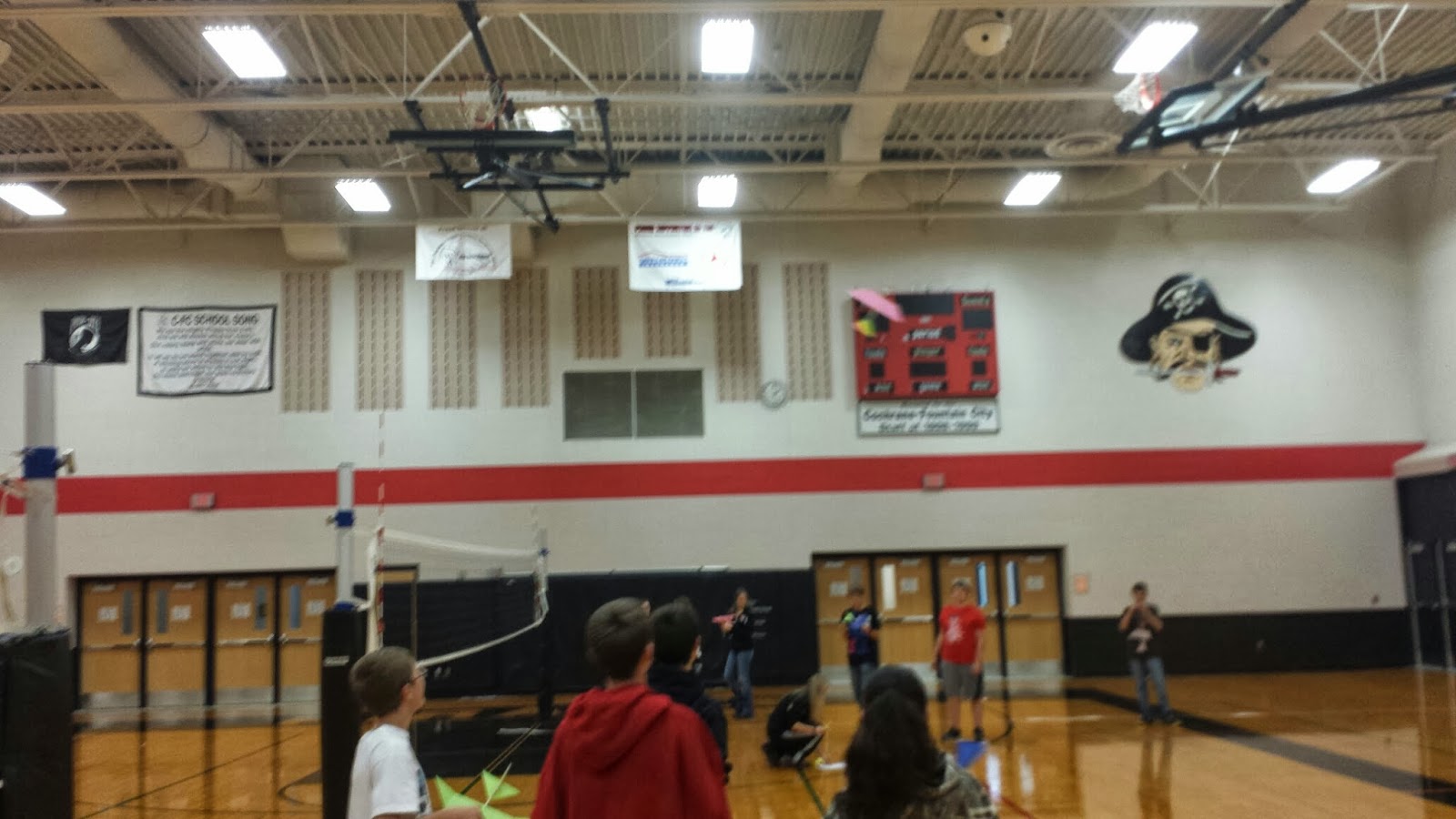 Data was collected on the specs of the plane and then more data for the length of flight and distance covered to calculate velocity. They were also watching for the point in the flight where the plane leveled off and forces would balance out.  The accuracy in collecting the data was probably not real good but the lab was more about learning the concepts of the calculations. 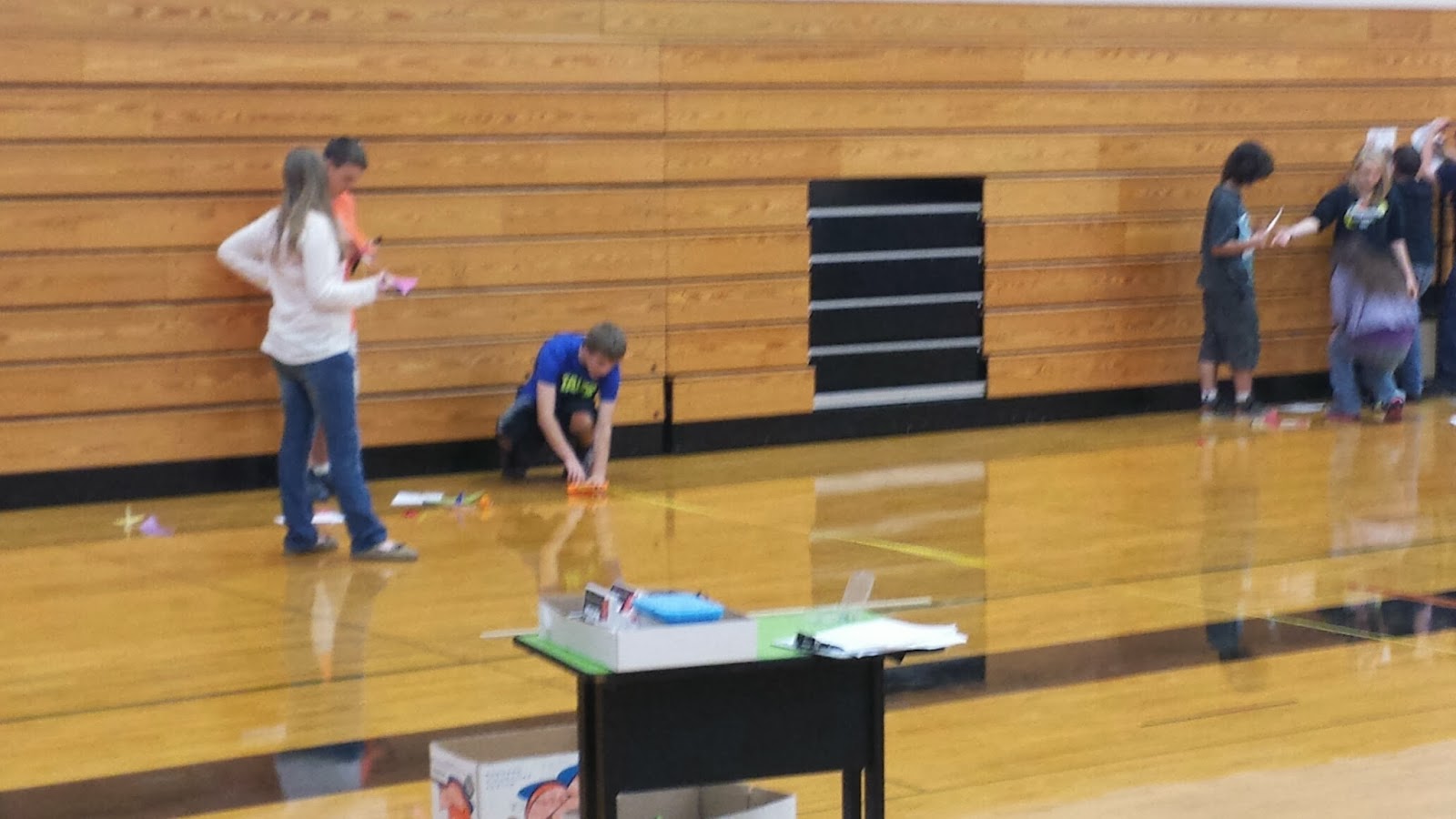 Posted by Scienceguyorg at 12:36 PM No comments:

Back in late 2009 when looking for other science related websites I ran across Untamed Science and was immediately enthralled by the quality of the media they were producing and the educational value of that media. Their video podcasts were almost the only videos I tried to watch on the tiny iPod screen.  I emailed Rob Nelson to tell him just how much I enjoyed what his group was doing and the quality of their work. He very graciously replied through several emails, for someone so busy I was really touched. 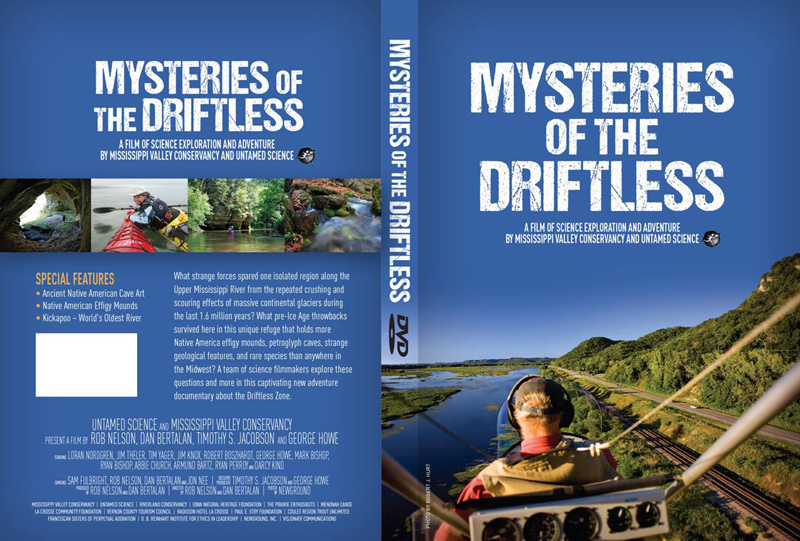 To me the Untamed Science group all appear to live the life that so many of us would want, to explore nature in all parts of the world. Their videos remind me of the adrenalin type videos mixed with the serene times with nature in some remote location. The special effects and animation add interest without being overwhelming. I encourage everyone to at least check on the Untamed Science About webpage. 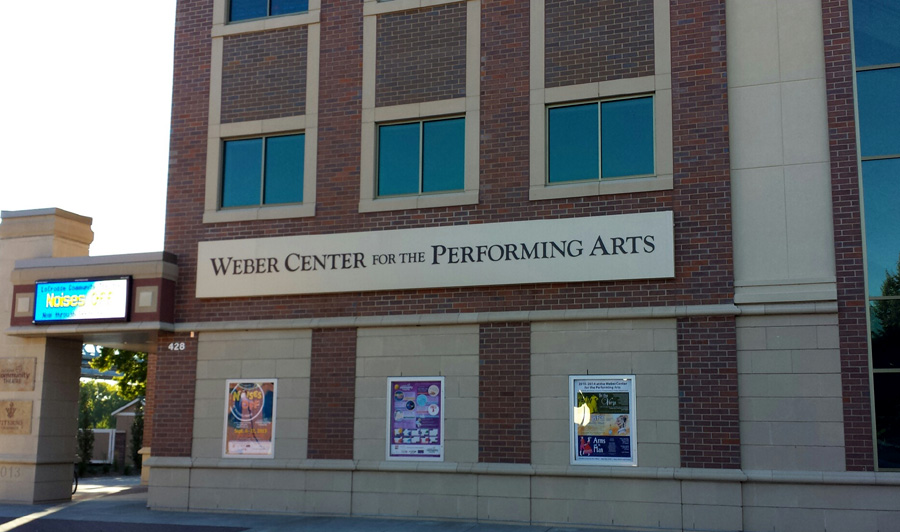 Several months ago I read that Untamed Science was working on a video of the driftless area which is the part of the world that I live in. I was so excited and donated a small amount to the project through their Kickstarter. Last evening was the premire in LaCrosse Wisconsin, 30 miles from where I live so made the drive to LaCrosse. Underestimated the popularity of the video and like many people did not get into Weber Center after the 450 seating limit was exceeded. There was another show later but I have seen the video so went back to Winona happy that this project was such a success. 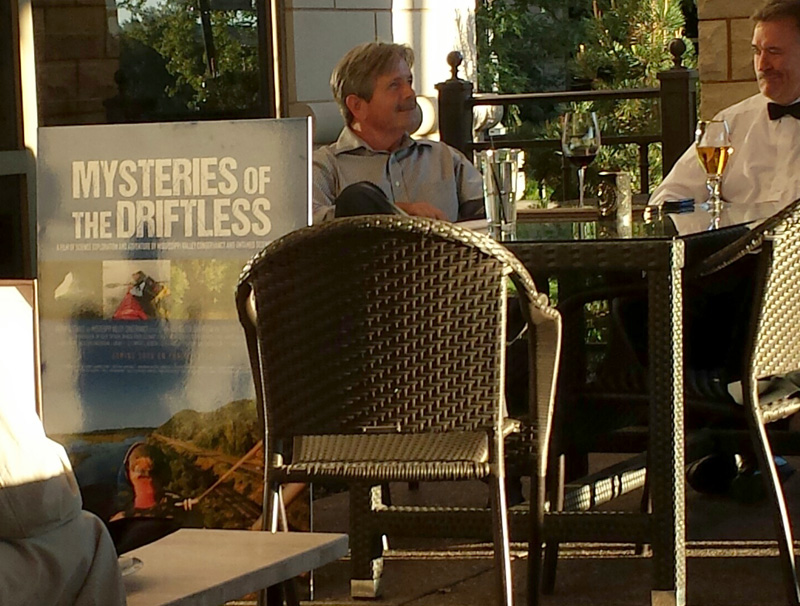 The post about my first Max Conrad website has had many views lately so I thought I would share another aspect of Max's life. Max Conrad was a famous aviator from Winona Minnesota but he was also an accomplished musician who had records and sheet music published. Recently I acquired two albums and a 45 rpm record. 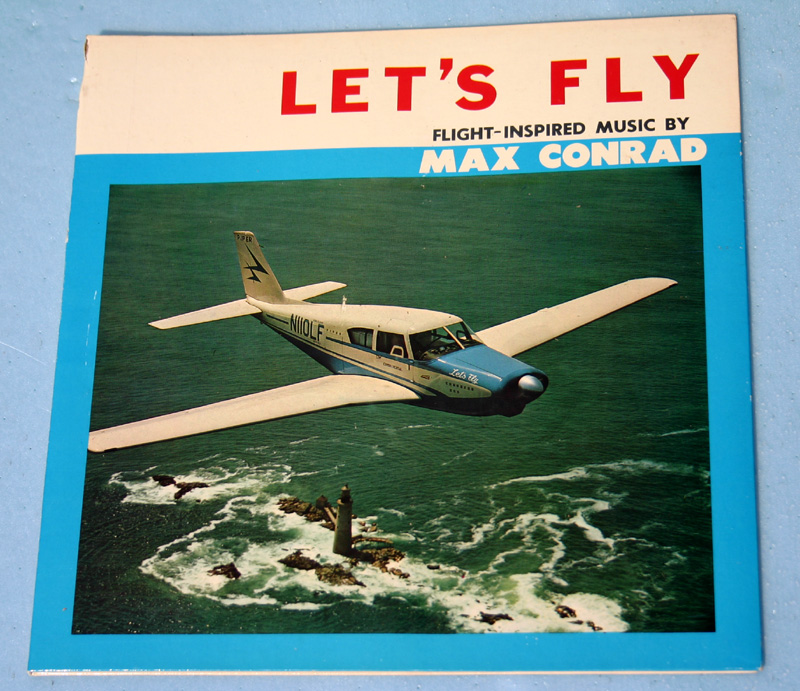 Max would often work on writing the music while on his many long flights across the Atlantic. 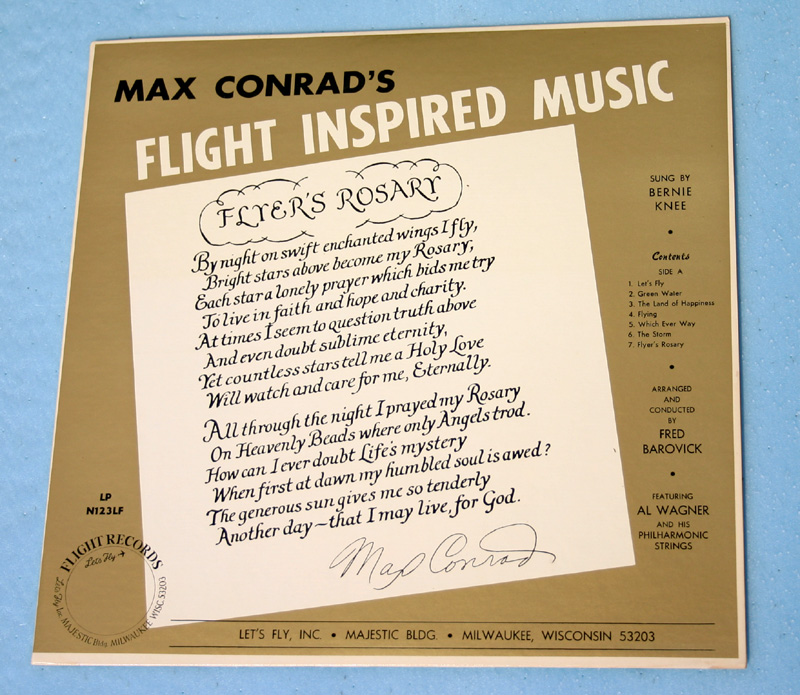 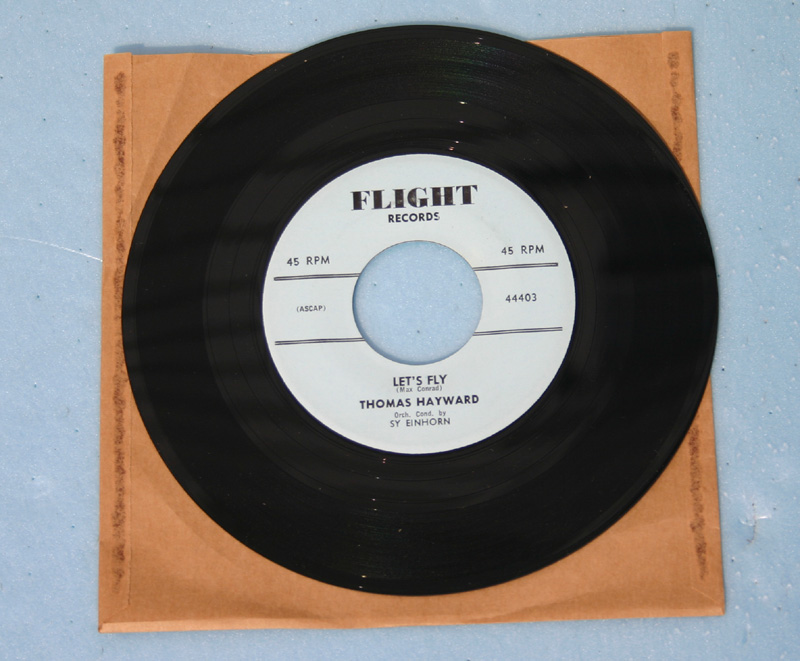 Listen to Let's Fly by clicking on video above.

Posted by Scienceguyorg at 7:26 AM No comments:

Even the simplest projects can be fun to modify and observe the results. My quest lately has been to create simple rubber powered airplanes that are built almost entirely from foam plates. For two different groups of kids the airplane wing was constructed from the material in two 9" foam plates. This created a model plane that would climb fast and high with 1/8" wide rubber strip. If the airplane was not adjusted just right it could hit the ground quickly as well.


In the formula for lift, wing area is one of the components, increasing the wing area should increase the amount of lift. Like most things the variables that lead to a result are dependent in some way. Increase the surface of the wing and the total weight of the airplane increases and so does the amount of drag. If the wing size was increased too much more it would not be stiff enough without some reinforcement. Larger propeller and rubber strip would be needed to power a plane that was significantly larger, I wanted to avoid that.

The new airplane with increased wing area appears to be a good compromise. Observing it in flight the flight speed appears slower and the flight looks more stable to me. Recent flights were in gusty winds and the airplane handled it well although at one point it looked to be flying backwards for a brief time.

Now the real test what success groups of kids have building and flying this airplane.

Posted by Scienceguyorg at 9:20 AM No comments: