My interest in the e20 electric free flight event came about mainly because I am looking for free flight models that will fly from smaller flying sites. With electronic DT (dethermalizer) it is possible to accurately set the time that the DT will actuate. I have flown my e36 free flights from pretty small fields by setting the DT time to be short. It was my thought also that a model that only weighs around 30 grams will survive some pretty hard landings without damage. 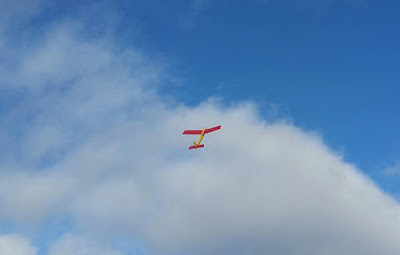 Before selecting an airplane I purchased the electric components from Bob Selman at BSD Micro, I knew of Bob from his tiny micro RC components and our mutual friend Floy Richards who passed away several years ago. I purchased a 2.5 gram unit that controls the motor run length and the DT time, the actuator for DT is a tiny servo that moves in one direction. I built a small pivot arm that one end goes under the servo rod that moves and the other end connects to DT line.  With my purchase I also selected the programming box, a Parkzone motor, a propeller, and one battery.  From flying tiny RTF RC planes I have many chargers.


For my first e20 airplane I decided I would build a balsa kit airplane and selected the Sky Demon from BMJR.  This plane looks like it could be a tiny RC plane because it has a full width fuselage; my thought was if I got tired of flying it as an e20 I could install tiny RC gear in the plane. I installed  the motor/DT unit on the outside of the plane with a couple of screws so it could be easily removed.

Building the Sky Demon was easy although some of the pieces were rather small and I had to use a tweezers to place them. I covered with Esaki tissue but tried a new to me product EZE Dope to seal the tissue, it doesn’t give off the odor that clear dope I normally use. It did pull the wingtips up when it tightened up giving them washout that I thought might be a good thing. The plane has a left turn under power and glide so I think one wingtip has too much washout.


Last weekend the wind was rather low although it was only 32 degrees F but I decided that was warm enough for test flights. The motor run was set to only 4 seconds and the DT was rather short but long enough to observe the glide. After launch the plane wanted to climb rather steep and to the left, so I launched banked to the right. The firewall of the motor was taped on so I could adjust it later, since then I gave it more downthrust and some right thrust.

Many flights were made; I am guessing probably around 15 although all were rather short. The plane appeared to fly in a stable manner although the transition from power to glide was not perfect. This will give me something to work on when I fly it again. The DT worked perfectly in those flights although sometimes it was only a couple of feet above the ground on DT.


I am providing the link to NFFS provisional rules for e20. Basically the airplane is limited to 20” wingspan, direct drive brushed motor and 30 grams minimum weight. My airplane weight slightly over 31 grams which I thought was good for a first build.

Posted by Scienceguyorg at 10:45 AM No comments:

How I decided to build the Retro Gnome hi-start free flight glider has a rather round about history. As my interest in free flight models has increased so has my desire to experiment with different aspects of free flight, in this case it was dethermalizers (DT).  My start with DT’s was with the viscous type which although lightweight, suffers from accuracy issues especially as the temperature changes. I had used the plastic clock windup mechanism that I purchased from Hank Nystrom in water rockets to deploy the parachute and it had worked well. Normally this mechanism runs through rather fast but it is possible to slow it down by putting very small weights on part of the mechanism that vibrate quickly and slow down the unwinding. Some people build their timers like this but I purchased the Micro DT from Hank. 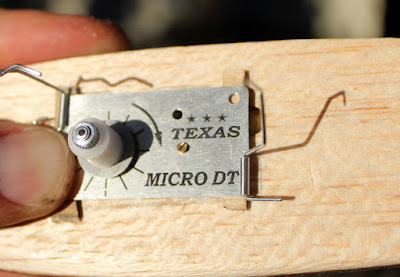 To test out the Micro DT I decided I would install it in the free flight hi-start glider that Hank had shown on his website with the timer, the Retro Gnome sold by Retro RC.  I met Mark Freeland (Retro RC) at the 2016 Nats and he showed me a sample of the glider.


Building the kit is relatively easy as it is laser-cut and there is an instruction manual, in some places the plans and pictures are a little small so I used a magnifying  glass, not going to say I am getting old. The wing seemed like it was not very rigid before covering so I used a technique Dohrman Crawford uses of using some reinforcing tissue strips over the structure before covering with tissue. The finished wing feels plenty rigid.


This glider uses a simple autorudder that  is pulled to the right by a small rubber band and to the left by a monofilament  line with a pin holding the tension until the pin is pulled out as the tow hook releases and the tow line pulls the pin out. As this is a hi-start glider a very thin rubber strip and line with a small flag make up the hi-start launching system, I purchased this from Retro RC also.


My hope is to do some glide testing of the Retro Gnome this weekend and take additional pictures but no hi-start launches. The glider must be adjusted so that it goes up on tow straight, when the pin releases it should turn right because of the autorudder.  The design includes adjustment screws for rudder movement, stab incidence change, stab tilt, and a tow hook that can be positioned in multiple  locations.

Posted by Scienceguyorg at 8:58 AM 2 comments: