You might think I am just mentioning cats to create an article with greater appeal and that could be partially true, but there is a tiny common thread.  For my work in technology I just moved a computer printer from one location to another, but much like my experience in moving two cats to another location the transition did not goes as well as I had expected. The cats went into hiding, the printer attached to the different computer did not want to install properly. Eventually over time the cats have become more sociable adapting to their new surroundings, I doubt the printer would have started working on its’ own no matter how long it was connected to the new computer. 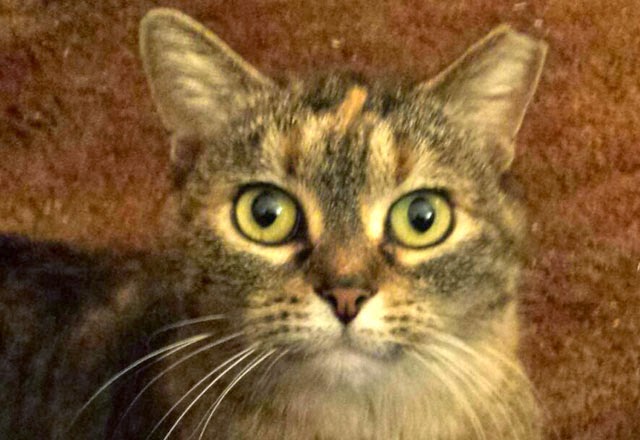 Experience tends to teach one that things are way more complicated than it may appear on the surface and what should work easily sometimes doesn’t. The beginning of next week will be 20 years of computer work at my present job and I had several years of experience before that at a different employer. Much you can learn by reading but some expertise is acquired by trial and failure. Just because something absolutely should work doing it one way but does not, trying slight changes might lead to success.

Back to installing the printer driver for the printer at the new location; I had the CD in the computer and left the USB cable unplugged until prompted to plug it in, and watched the messages go across the screen. After clicking on a couple of prompts the whole process should have been automatic and complete in a couple of minutes. A message on the screen warned this could take several minutes and considering this wasn’t the newest computer I didn’t get too excited about the slow progress. Finally as the bar completed its’ slow progress across the screen an error screen quickly popped up telling me that the install had failed because the process took too long. Now how could that be?  What else did the computer have to do that it would get bored with the tedious process of installing a printer driver.

As the rest of the message suggested I tried the whole process again, and again received the same error. By now what should have taken a couple of minutes had wasted close to an hour. I took a new approach and downloaded the printer driver from the Internet with the installer and one without. Using the installer appeared to start the same install program as before. I stopped this which started an uninstall process which took more time.

After another reboot I installed the driver without the install using the Add Printer option from the Control Panel. This went quick but there was no option for the USB connection. Not sure if getting the driver to at least appear as installed helped, but I started the driver with the install that had been downloaded and the process went pretty fast and was successful.

At this point I feel like I should have a moral to the story but I really don’t.  Other than my somewhat pessimistic view of expect the unexpected. Before moving the two cats my mother had I moved the older cat and she accepted the move fine until she had to be put to sleep. Most of the time installing a printer is a really quick task that anyone can do.

Posted by Scienceguyorg at 11:34 AM 3 comments:

In that I have some experience with mousetrap powered cars, a student has asked me for some advice on a similar event in the Science Olympiad competition known as “Wheeled Vehicle”. The model car can be built like a mousetrap powered car but must be powered by a “non-metallic, elastic material (rubber bands, fishing poles bungee cords). I consulted with Al Balmer aka Doc Fizzix and he gave me some advice and sent a rubber band powered car kit that his company sells. Competition requires that a kit cannot be used but as with the mousetrap cars, I learned so much from first building a kit. The kit car also has the adjustable braking that is needed for the competition.


Before actually building the kit I was giving the student some advice based on what I knew from trying to get maximum distance from a mousetrap powered car. The challenge for Wheeled Vehicle appears to be more to get the car to move as quickly as possible through a certain distance and then stop accurately on a spot. The car must move very accurately in a straight line also. 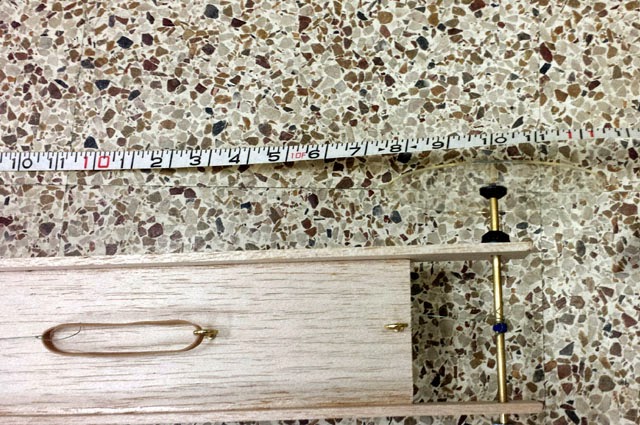 With the Doc Fizzix kit car I spent some time running it across the smooth floor in a local mall yesterday and measuring the distance. I had brought some Tan Super Sport rubber strip 3/16” width to try as a replacement for the #64 rubber band included. For rubber model airplane use the Tan Super Sport would be superior but in my trials it didn’t seem to work as well. That could have been because the actual loop of rubber and the length of string were not correct. 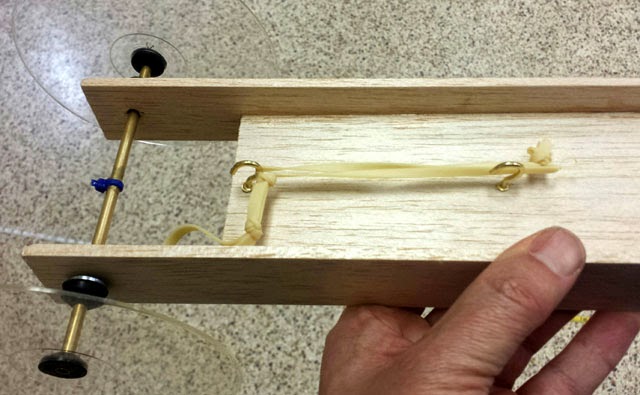 For the first runs I only stretched the rubber band to the first hook position, the runs were less than 20 feet. When I stretched the rubber band to the second hook then the distance really increased. On the last run the car went 61 feet which is over 18 meters. For the competition the course is never longer than 12 meters so distance shouldn’t be a problem, more emphasis will have to be placed on speed and accuracy.


For the competition some type of lever release is needed so that the eraser end of a pencil can start the car and a pole in the front of the car is needed for the laser siting that is used in competition. Some type of adjustable steering might be nice although my kit car appeared to travel very straight without adjustment.


Added a lever device that locks into a wheel on the axle that has a notch in it. The white plastic rigid tubing twists in the holes in the balsa supports, the lever was glued on top of the plastic.

Posted by Scienceguyorg at 8:23 AM 8 comments:

As the New Year starts I have given much thought to how I can expand on some of my real passions in life, mainly my model aviation hobby and my science related projects for students.  I have been building a more advanced free flight model airplane for an electric competition class known as “E-36”.  The airplane kit is a Super Pearl E-202 that I had obtained plans and partial kit from PearlFreeFlight.com. In this partial kit the smaller parts that would require more cutting are supplied laser-cut and the longer strips of balsa I obtained at a hobby shop or had in my personal stash. Additional parts that will be needed are the electric motor, timer, ESC, battery, carbon boom, covering and some small miscellaneous parts. Much of the electronics are coming from Texas Timers.  To me it is often a more educational experience if you are forced to research and obtain parts from various sources.


On my website Ideas-Inspire there has been a good amount of activity lately and even a few questions on building the projects. Mousetrap powered cars are again most popular but interest in the syringe hydraulic arm is still high and model aviation related articles. I have been experimenting with a rubber powered car from Doc Fizzix but need to find somewhere indoors to run it.  There is a Science Olympiad event related to this and I would like to be of more help on this.

Recently I connected on Linkedin with many people working in STEM-related careers, a few have contacted me and seem interested in what I have done. One person in particular is Milton Bertrand that has a social media website related to STEM known as Geazle. There is a huge amount of capability with the Geazle system and I am urging everyone interested in STEM to join. I plan to write in more detail about Geazle in the future. 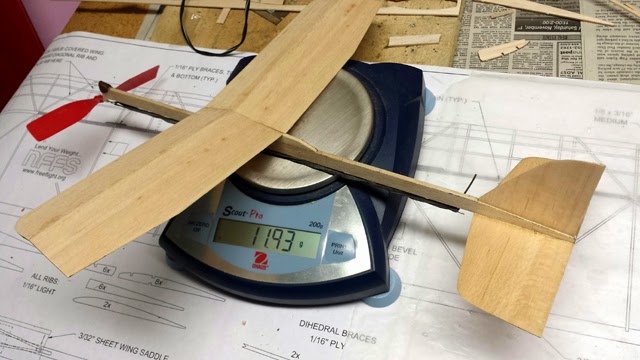 Before the current blast of artic air I had a chance to do some model airplane flying outdoors. Someone sent me some simple rubber powered free flight kits. One I built in a day and had it flying outdoors on Christmas day, another one of the planes is under construction.  Last Saturday was relatively warm also and I flew some other simple rubber powered model airplanes. There was another person flying a RC seaplane from the snow and I talked to him. Turns out we had met before flying indoors and he had a unique model plane created from two RC Champs connected together.

Posted by Scienceguyorg at 1:40 PM 2 comments: