Another year of College for Kids at Winona State University is completed. Even teaching to smaller class size it was challenging. Building anything is not something that comes easy for many kids and probably many adults. Someone that was an educator for many years and works now with model aviation education told me once it is the spatial intelligence that many kids have a problem with. My father was a master at that and could envision complicated machines in his head such as 4-wheel drive tractors and then build them with no plans.  I would like to think I have a little of his ability. 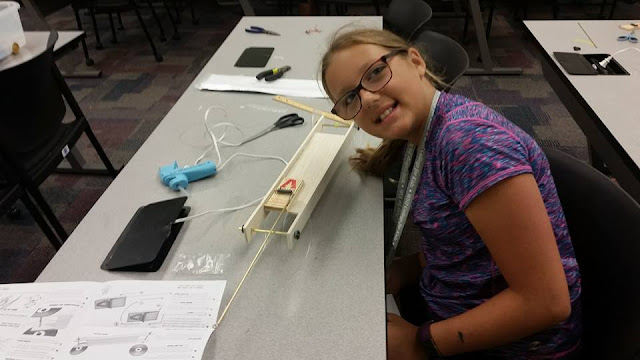 Again this year students built the Doc Fizzix mousetrap cars instead of the design I had on my website, which saved me a ton of work getting ready. I think I am getting better at teaching with this kit and the cars went together fairly well this year. On the same day as building the mousetrap cars students built the framework for the Mountain Lion Mark II balsa and tissue model airplane which was new this year. This is a more delicate model plane than my foam and balsa model FFF. There was less breakage than I imagined but I had cautioned the students several times about the delicate parts. 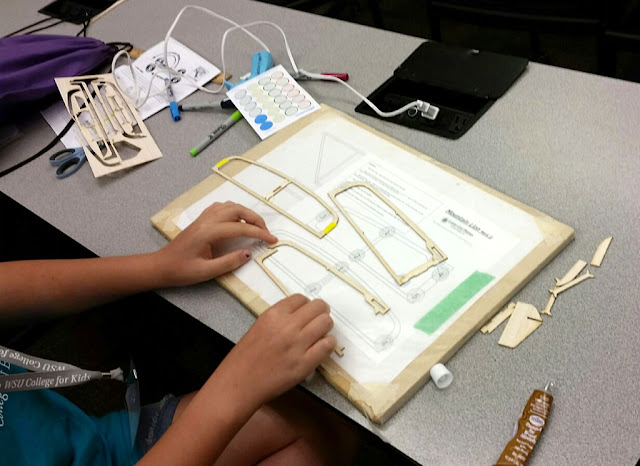 The final day the Mountain Lion kits were finished up. With the first group of students I had forgot to caution the students that although both wing halves were identical, you have to cover with tissue on top side only of each wing panel. On a couple of the planes they had to rip off covering on one wing half and recover.  Teaching the construction of this plane should go better the next time. With experience you learn what the more difficult parts are and adjust your explanations accordingly. 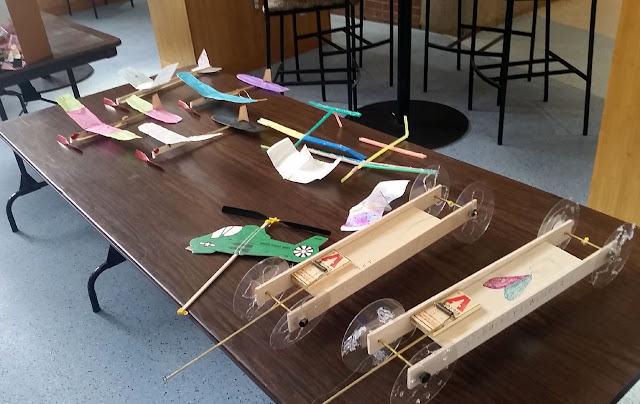 The local newspaper, Winona Daily News did a very nice story on College for Kids this year including much about my class, I have provided the link. Also a student had left her Mountain Lion airplane and I flew it at local park, it flew every bit as well as the one I had constructed.

Posted by Scienceguyorg at 6:50 AM No comments:

Two out of four days are complete now for my College for Kids class, STEM DIY. This year I chose to teach two smaller classes of six instead of a larger class of 12. It has worked much better, and I can spend a little more time with individual students and not get too bogged down. 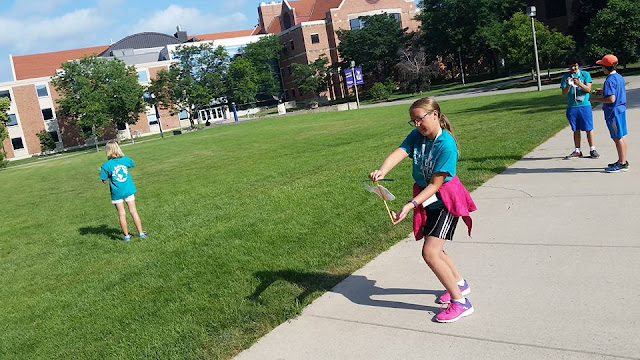 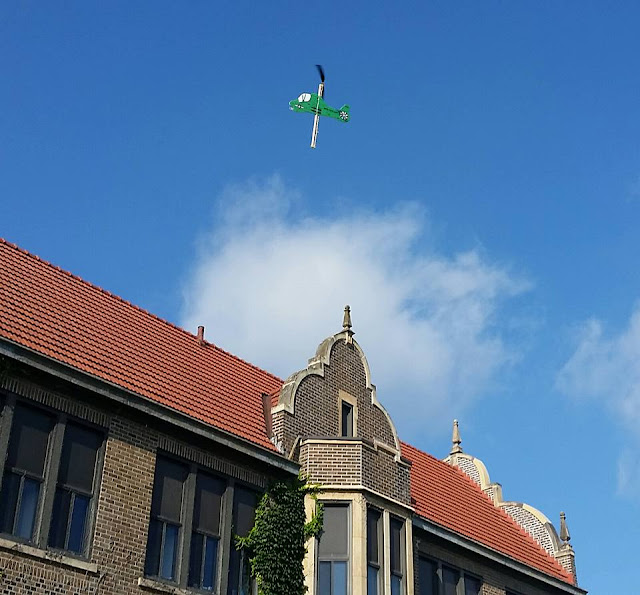 The first day we built the rubber powered helicopters and FPG-9 gliders. There is a small amount of assembly with the helicopters but not much. Just the same the students struggle to visualize how the parts fit together. The helicopters were flown both outside and inside in atrium building. Amazing how high some of the helicopters went. In one flight a helicopter flew above a tall building and got stuck on the roof. FPG-9 gliders were launched from a catwalk indoors, some glided better than others but all seem to curve during the last parts of the flight. 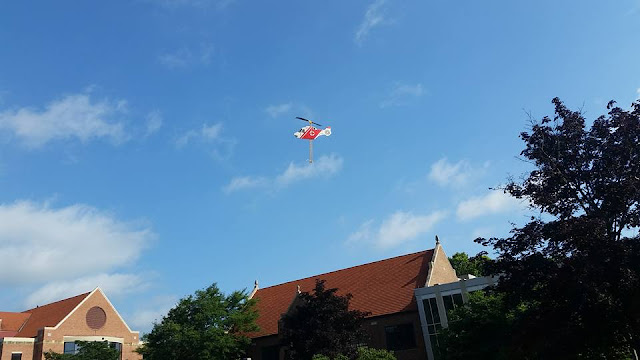 Day two I did some demonstrations of other foam gliders I had built and the new walk along gliders created from a new foam that is stiffer than previous ones by Sciencetoymaker. We went to atrium to try the walk along gliders but first I flew my small Butterfly mini stick type indoor rubber model. The students were really amazed how slow it flew and easily it circled upward. 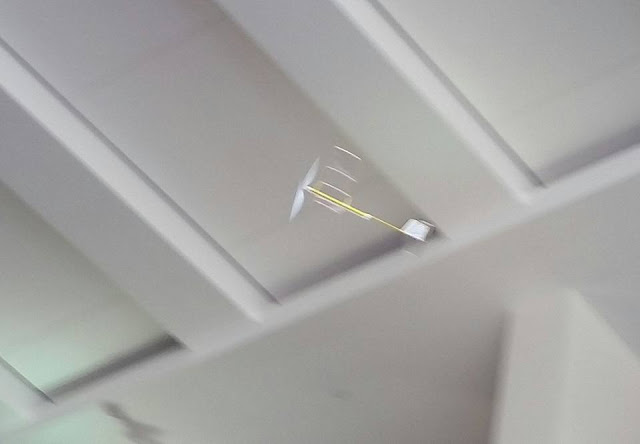 Some of the students were able to catch on to the walk along gliders and enjoyed the challenge, other quickly gave up on it. I tried to help some students individually that were interested. 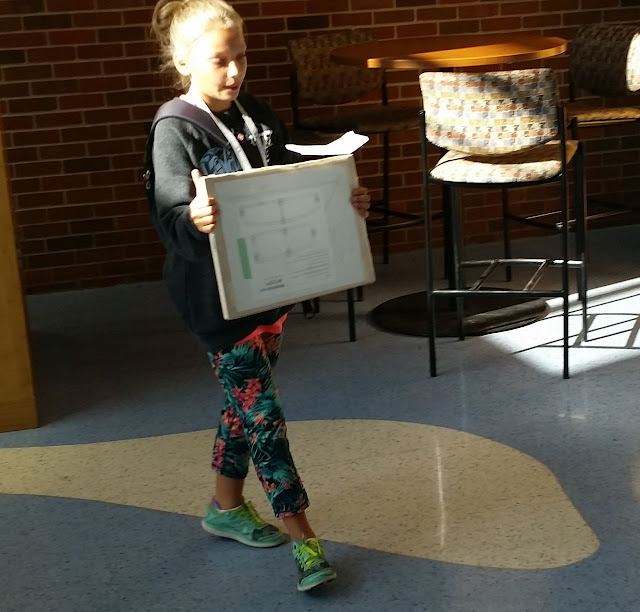 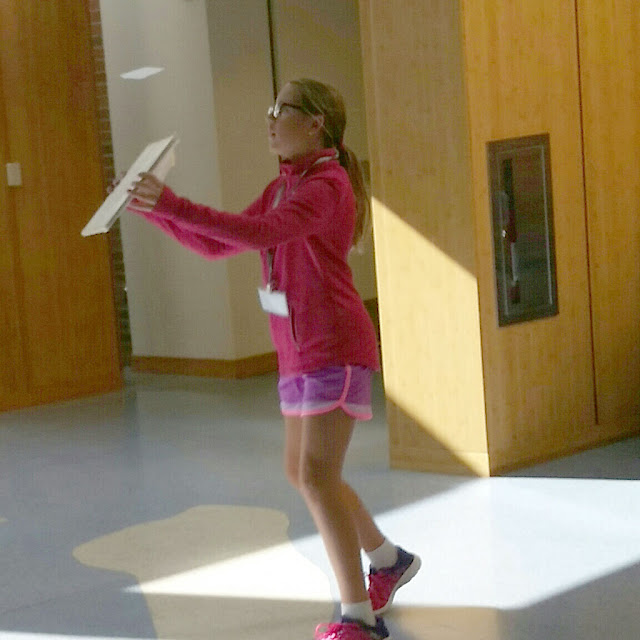 Building the Fantastic Foam Flyer rubber model did not go as well as I had hoped. I brought in a sample to show but still students struggled how to visualize how the parts go together. 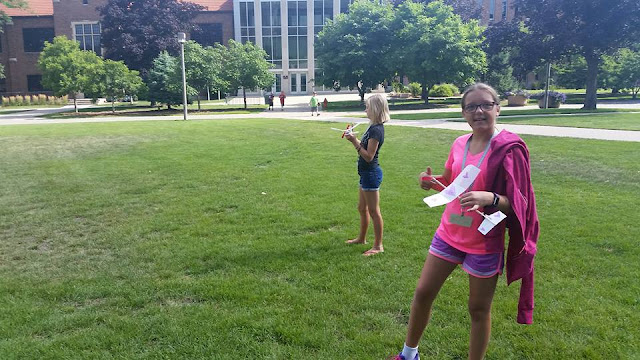 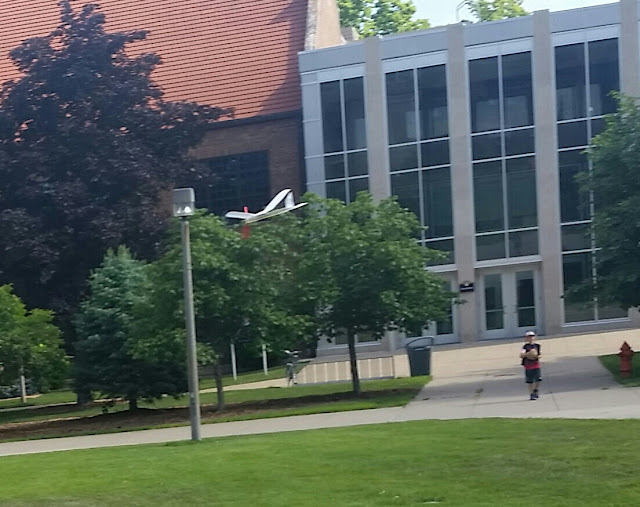 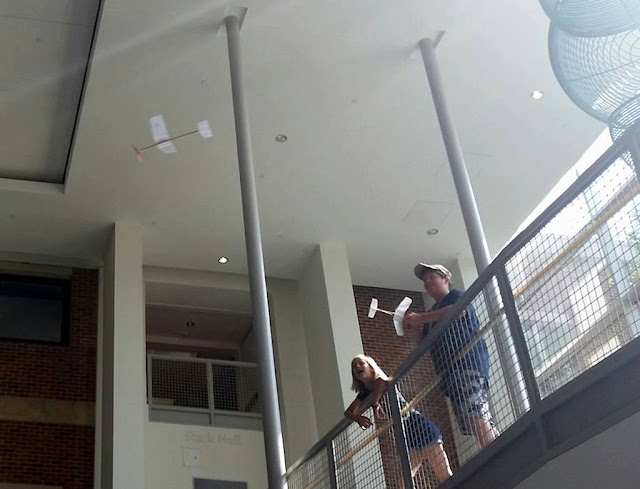 The projects will get even more difficult the next two days, sure glad the class size is smaller. End result was the planes flew pretty well for the most part. If anything it will be the balsa fuselage, not the foam that breaks.

Reporter  and photographer from local newspaper were there for a story that will run Wednesday, I will update this article with the link.

July is a busy month for me with College for Kids class and free flight model airplane contests. It is a good thing I spent the time in June fishing as my fishing success now has the fish winning as I am not catching anything. I noticed on a recent beautiful evening weather wise that there was almost no one else fishing either. The fish cannot just quit eating can they?


As the wind goes down later in the evening I have been flying the Mountain Lion Mark II outdoors to get it adjusted for consistent flights using the included 3/32” rubber and also 1/8”. The plane appears to fly much better to the right but will switch to flying left before the rubber has completely run down.  Plastic propeller with hangers appear to have right thrust built in which should be good as the torque normally forces a model to fly towards the left. The Mountain Lion Mark II has a rather small vertical fin that seems really sensitive to adjustment, I just wonder if the built-in right thrust is too much for this design.


My two e36 electric free flight models appear to be flying better all the time as I make improvements. These models seem sensitive to some adjustments I make and not to other.  The Super Pearl e202 that I have been flying for over a year has had some improvements. The balsa pylon that has broken several times I covered with thin fiberglass cloth using Sigment. A lever arrangement was created under the DT servo so I could put a lot more tension on the spring connected to the DT line. As I did not use C-grain balsa for the vertical fin, it had warped. A new one was created using to layers of thinner balsa running at opposing directions, an A-stop Rudder Adjuster was added purchased from Larry Davidson.  On my BMJR Starduster e36 I discovered the rubber bands were not tight enough so I corrected that. Both models are climbing in consistent power patterns.


In working with the competition free fight models I feel like I have learned so much about aerodynamics and getting a model in proper trim. One of the most important lessons has been to get the CG (Center of Gravity) location where the plans indicate and then make small adjustments to the incidence angle. With my simple rubber powered beginner models I tend to move CG around to adjust the climb and glide.


It is my hope in teaching my upcoming project building class that will be mainly model airplanes that I can relay additional knowledge on adjusting models properly from what I have learned. For whatever reasons; the program as a whole has reduced enrollment while my class is maintaining the same level.


Posted by Scienceguyorg at 9:33 AM No comments: