Some of the best times I had this year were enjoying my model aviation hobby. After going to the 2016 Free Flight Nats and some Minnesota contests put on by the MMAC club I was primed for a winter of building more models. Some of the components and materials I had to work with were the first time for me such as covering with ¼ mylar, rolling a balsa tube fuselage, creating a folding propeller assembly, setting up DT systems with mechanical timers, learning to braid a rubber motor, and building completely from plans. I had to ask a lot of questions but people in the free flight community were happy to help and I received a whole lot of good advice.

For the most part the planes I built flew pretty well, I still have some to learn about towing a towline glider; that I will work on in 2018. None of the planes were lost and most are in flyable condition, the E36 Starduster I am going to retire because I have tried to patch it one too many times. I learned a whole about trimming a power model with that plane.  From what I learned I fixed up my Super Pearl E36 and had it flying really nice at the 2017 Nats.


I was really happy with the Polecat X P30 model I built from Don DeLoach short-kit, this model did not need a single adjustment to fly well. I was afraid it was too windy to fly P30 at Nats but flying it in a contest in Minnesota for the first time it got a third place. My Wilbur oldtime rubber model did well after just needing some thrust adjustments.  The PeeWee 30 model Basic Yeller built completely from plans had many good flights this year, this was the first time I have used a glow engine in several years. Flying in the E20 event at the Nats I think I came in 7th with BMJR Sky Demon which might be near the middle, hopefully I can build a more competitive E20 for 2018.


After just a couple of years flying contest free flight models I do not expect to be winning against people that have been doing this for years. If I did I would no doubt lose interest, having the challenge out there for the future is what keeps me interested. For next year I am building a bigger glow powered model, Witch Hawk 500 and another oldtime rubber model a New Gollywock. For the One Design event I am building a Streak powered by a K&B .049. For E36 NOS I am building an Eureka another Don DeLoach design.

At the end of 2017 flying season or at least what normal people tolerate for cold I flew my first control line model in a long time, an old design the Prop Buster. This time it is electric powered with a system that is comparable to .15 glow engine. The first flight was too windy and I had too long of lines resulting in a crash. After minor repairs I had it flying on shorter lines. For next season I am going to build a basic .049 glow model to get more comfortable with CL flying before risking the electric model.

Thank you to everyone who has been reading these articles, seeing the number of views encourages me to keep new articles coming. I have met some really wonderful people at the free flight contests and others I only know from online exchanges.

Blog Articles on Airplanes Flown in 2017

Posted by Scienceguyorg at 7:00 AM 4 comments:

Going Back in Time – Model Aviation

I have never thought of myself as a “luddite”, a person that fears technology, in fact I have been working with some of the fastest moving technology, computers for many years now. I have driven hybrid cars for the last several years. Building model airplanes from balsa no doubt would be considered a hobby from the past but it is what I enjoy. Free flight model airplanes are the oldest facet of the hobby and so far most of the free flight models are still built from balsa. For other types of model planes such as radio control slope gliders balsa isn’t ideal as it breaks too easily. High performance thermal sailplanes are now constructed from materials such as fiberglass, foam, carbon fiber, and Kevlar. I went along with this when I was flying RC hand launch gliders but the idea of paying over $300 for a model airplane kit is just something I have not justified.


My desire to build some of the older free flight models I think is partially because I feel like I missed out on free flight when I was younger flying control line and radio control models instead. Recently I built and flew a control line model although it was powered with an electric motor. Some of the free flight models I am building are from a time way before I was born however, such as the Flying Aces Moth rubber model I am building, a design from the 1920’s.  The other day I ran across videos on the Internet from people who tried to live their life in another time period by furnishing their home and wearing clothes from another time period, I doubt I will go that extreme.

Several months ago I reread a book about a modeler growing up in New York and riding the subway with large gasoline powered free flight models to fly in a park. I wrote a blog post on the book, Tales of an Ancient Modeler by Norman Rosenstock. I am now currently rereading the book by Dave Thornburg, Do You Speak Model Airplane.  Although the equipment and materials available then was nothing like we have now, the interest level in model aviation was unbelievably high back then.  Another book I just purchased, The Fascination of Flight the story of famous modeler Hank Cole I will be reading soon. 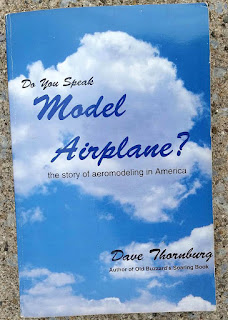 This past year I had great fun in flying the older designs I had built a Jetstream towline glider, Wilbur rubber model, Sniffer, and Basic Yeller PeeWee 30 model powered by a Cox PeeWee .020. For next year I am building additional glow powered models. I have obtained a couple of older glow engines a K&B .049 and K&B .19 Greenhead. In flying e20 and e36 electric free flight models I have found electric power works really well but yet I have this desire to work with the noisy and messy glow engines again.


I plan to write more blog articles about what I find most interesting in the books I am reading on model aviation history.

Never do I get bored with my model aviation hobby as I have many facets in the hobby that I enjoy.  Competition in free flight and radio control sailplanes is part of it but I also enjoy flying just for fun,  model air plane building with student groups, and giving demonstration of model aviation while combining history.  My more recent demonstrations have been to older groups but I have also demonstrated in public schools and a local university.  My hope is that through practice I am getting more connected with my target audience and making the presentation more interesting. I recently did a presentation for two groups in a nursing home and they really appeared to enjoy what I presented. 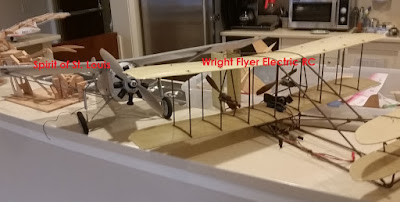 This blog post will be really short but I encourage those interested to check out previous blog posts on demonstrations I have done. Please consider doing a demonstration for a group, it is a lot of fun and not that hard. I have included links to some of the products I have used.

Very briefly, my presentation is about the progression of ideas in aviation including the role model airplanes were part of. Then I demonstrate the progression of ideas I had starting with the very simple Foam Plate Glider (FPG-9) and then designing more complicated foam gliders and rubber powered airplanes. At the end I do a flying demonstration of some really lightweight models.

Video of Practice Before Demonstration

Posted by Scienceguyorg at 11:30 AM 2 comments: