Applying the Words of Charles Grant to My Model Flying

After building and making test flights of the Charles Grant designed Cloud Tramp rubber powered free flight airplane recently, I got out my copy of his book Gateway to Aero – Science Fundamentals of Aviation Demonstrated by Building and Flying Model Aircraft and started reading it.  Although the book is rather outdated I was struck by some of his insights at the time, so I copied a few things down.

“The aerodynamic form and contour of the modern airplane are determined by the performance required of it.”  “Drag increases at the square of the speed” and “to further reduce drag all corners and angular contours were replaced with smooth curves”.   It had me thinking about what I had witnessed mainly in radio control sailplane flying this past year and how the performance differs so greatly with the aerodynamic form of the sailplane.

Having participated in more thermal duration contests this year I was amazed at the performance of the top designs such as the Xplorer and Supra. In studying the form it is evident that angular contours had been replaced with smooth curves where possible. In flying in thermals the speed is normally not so great but zooming off the launch or flying out of sink reaching a higher speed is important. I realize there are many other factors why my box fuselage Gentle Lady sailplane was so much lower in performance than a Supra but extra drag is part of it. A couple of years ago I did a hand toss test between my Gentle Lady and a Shadow 2 meter sailplane which is very sleek but heavy.  The length of the glide of the Shadow was many times that of the Gentle Lady.


This past year I have done a lot of slope soaring from small slopes and the drag of the sailplane makes a huge difference there. It is the difference between not being able to fly for more than a few seconds or being able to slope soar for several minutes. On one slope I have been dynamic soaring and the sleek glider not only will stay up longer, it is also much easier to fly.

I was looking back at my progress in dynamic soaring for one year. This was from the same small slope, which works for south or north winds. The north facing side is higher creating more lift on the front side but the wind is more commonly from the south. Most common is south-southwest which works with a more efficient glider.  The very first time I had any success with DS here was using a RC discus launch glider, Art Hobby’s Hyper DL.  This is also the glider I have used to get my largest number of consecutive laps which is almost 50.  As I also use this glider for thermal flying, I have been hesitant to fly DS with it.


Most of my DS attempts this year have been with a foam Super Scooter which is no longer available. Even though this glider did not stay up too well trying to DS on this small hill, I became more comfortable diving to the backside and turning towards the hill. There were a lot of crashes but only minor repairs were needed. I practiced flying as smooth as possible; if I pulled too hard on the elevator it would start to stall. 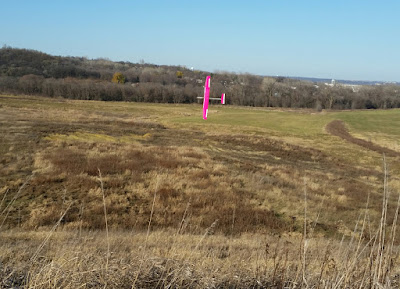 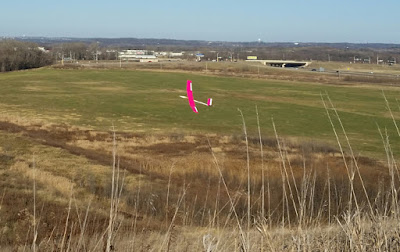 Towards the end of the season I had my Multiplex Dart flying which was an old RC hand launch glider. I added ailerons and stiffened the wing with carbon and covered with Monocote. This glider will stay up for most conditions and flies fairly fast.  In fact when flying on the front side it must be kept flying fairly fast or the wing will start wiggling and then it can stall.  On my last flying session a friend took many pictures of it flying DS circuits.

After a year of flying DS from this small hill, I have improved but feel I have a ways to go.  In watching videos of really good DS it looks like their glider is on a track making an almost perfectly consistent path lap after lap.  There are times when I feel my pattern must have been good as the glider will start to accelerate quickly but I don’t seem to keep this going.


This has really been fun and the number of repairs required has been diminishing. With another season I have a 2 meter glider that I want to take to the back side.

Posted by Scienceguyorg at 8:50 AM No comments:

Until I can get to some free flight contests again about the best way I can feel somewhat connected to people with this shared interest is to enter “postal contests”.  In the Internet age sending flight times recorded by the honor system can be sent over the Internet along with images and video. This past Labor Day Weekend I had entered the Sky Bunny Postal hosted by Gary Hinze and had a lot of fun flying the same airplane as other people around the world.

Early August is the Cloud Tramp Postal which really isn’t so much a competition but the simultaneous flying of the rubber powered free flight Cloud Tramp model designed by Charles Grant who is famous in both full-scale and model aviation.  The entire name for the event is “Charles Hampson Grant Memorial International Mass Launch Of Cloud Tramps” which is hosted by the website “The Cloud Tramp Homepage”.


Volare Products sells a laser-cut Cloud Tramp kit for a reasonable price so I had purchased the kit along other items in my order, there is the option to purchase the kit with a balsa propeller blank but I used the included plastic propeller. Building the kit can be done easily in a single evening; it is all sheet balsa with no covering needed. The plans had appeared originally in Model Airplane News magazine, August, 1954. There is a copy of that article along with modern instructions.  You are given parts for the option of using an “L” bracket for the motor hangar or use a prop button; that is the option I used. 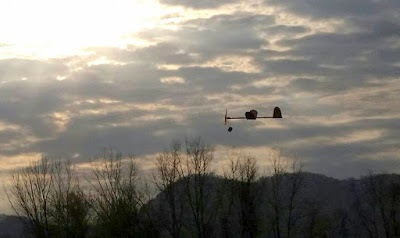 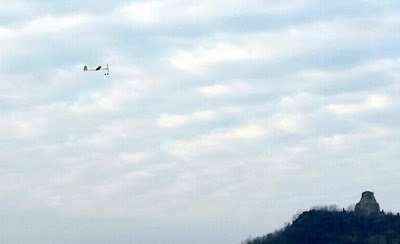 Veterans Day 2015 was my only flights of my Cloud Tramp model and the weather was not ideal. As high wind and rain was forecast later that day so I got out early for some flights. It was windy at times and the temperature was only in the mid 40’s. After pushing the wing back to cure a bad stall, the Cloud Tramp made some good flights. It appeared to fly stable even with the wind. More right turn was needed so I bent and glued a rudder tab and flew again early afternoon before it started to rain. 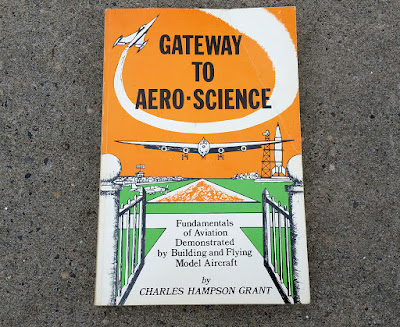 Cloud Tramp Articles on Endless Lift by Gary and Darcy


Posted by Scienceguyorg at 11:58 AM No comments:

Several years ago I had received an email from Tim Eisele from Madison Wisconsin, an outdoor writer who was working on an article on the famous Armistice Day Storm of 1940. This year will mark the 75th anniversary of that tragic blizzard that claimed the lives of many duck hunters. Our local aviation hero Max Conrad assisted in the Winona rescue effort by flying a Piper Cub in winds gusting over 50 mph for two days dropping supplies and guiding the rescue boats. 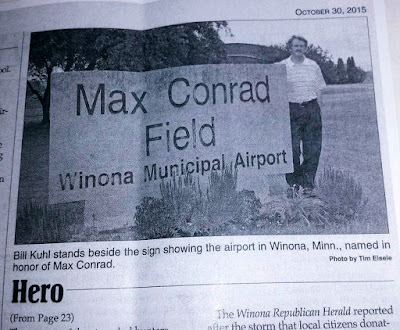 Tim had seen the Max Conrad website I had created and that is why he had contacted me, I have since given the website domain to members of the Conrad family so they could create a website dedicated to the memory of their father. After meeting for lunch in Winona for an interview with me, we went out to Max Conrad Field where Tim took a picture of me in front of the sign. In our talking when I mentioned my science projects website and activities Tim told me his wife was part of the Wisconsin Afterschool Association and might be interested in what I was doing.


After contacting Tim’s wife, she put me in contact with other people at the association and I was given the chance to teach a class at their conference in Madison. The first year that I went the class was on building mousetrap cars, the second year the class was on building foam model airplanes. What a thrill it was to teach to teachers who could pass on my knowledge to students. 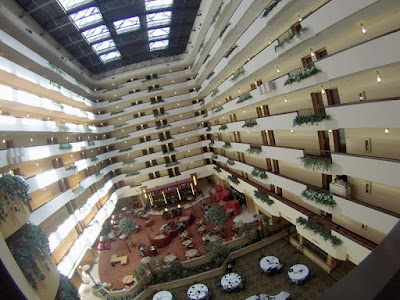 Due to other obligations I have not been back to teach again. I had almost forgotten about the article that just ran in the Wisconsin Outdoor News October 2015 magazine.  It really has been amazing to me through the projects I have done and what I have shared over the Internet the many wonderful people I have met and the opportunities that I was given.


Posted by Scienceguyorg at 11:24 AM No comments: