This is another story about how trying to be cheap cost more in the long run.  Several years ago I purchased this heavy fiberglass, foam, and obeche wood 2-meter glider. It seemed so heavy I did not get very excited about installing radio equipment until last year. Fall of last year I finally made some flights with it and was amazed how well it flew, especially in windier weather.

For this year I upgraded to a Spektrum DX9 transmitter from the DX6xi, learning to re-program the glider was a challenge but I figured out most aspects.  Luckily I did tests glides instead of trying a hi-start launch from the start. The radio seemed to be shaky and the elevator control was not that responsive. I took the plane home and installed a longer arm on the elevator servo, feeling confident the next time test glides would be better.

Next outing control was not any better and the radio took a long time to connect up, I should have recognized that as a bad sign.  I had charged the battery again before flying and the battery was only a little over a year old. On the last glide I threw the plane a little harder, it went up and it went down hitting the ground rather hard. One wing suffered damage that I fixed to be strong again but it is not very pretty. I also checked the battery condition and was shocked to find it was really low.


If the battery was charged, putting it on the expanded voltmeter would drag the needle to the left in a couple of minutes. I decided it was time to do some research, my inquiry on the Facebook Sailplane and Soaring group brought several suggestions as did some emails to someone that had just mentioned they had battery failures on batteries less than a year old.  This person like me had soldered the cells together instead of buying a pack that comes put together. Further research pointed to the possibility of soldered cells having a shortened life span because of damage from the heat.

I ordered 2 Sanyo Eneloop nickel metal hydride battery packs because I am going to replace another pack I soldered even though it appears to be working good for now. Battery monitoring will be done more frequently as well.  With the new battery in place the radio seems more solid, the servos are faster and do not make noises when not moving.

Lesson learned; it could have turned out much worse if I had crashed from a high altitude, no doubt the glider would have been totaled. Looking back to last season the radio equipment did not work as fast or as smooth like it does now but I am not real experienced in the 2.4 systems yet.

Basic Aerodynamics With a Lesson

Posted by Scienceguyorg at 9:30 AM No comments:

April in Minnesota is normally better for flying kites than for flying lightweight model airplanes powered by a strip of rubber because of the windy conditions. After a rather harsh winter I wanted to try one of my Guillow's Cloud Buster airplanes with the new 3/16" rubber strip I had purchased from Volare Products. Yesterday the wind was low after it stopped raining and I had taken time off from work to see a static display of model aircraft. I managed to get in a few flights in rather low wind conditions after I had made some corrections after flying the day before. 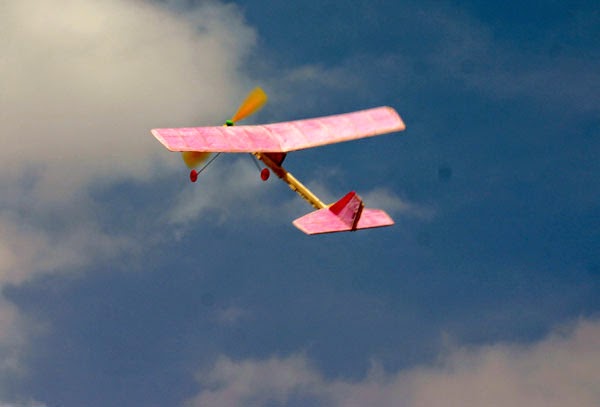 On this particular Cloud Buster I had used a propeller assembly that is designed to slip over the balsa motor stick and it appeared the friction fit had worked loose, this was fixed. The airplane would not fly a consistent circle path and I theorized the side thrust was changing because of the loose propeller mount. I also noticed a slight warp in the wing which I straightened out by wetting the tissue slightly and using a heat gun normally used for covering with plastic film covering. 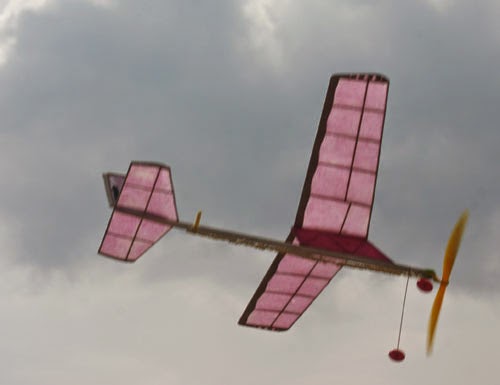 With the new changes the airplane was flying completely straight which is not what you want unless you have a really long flying field. I experimented with some clay on the right wingtip until I had the circle about the right size. Happy with this I went to the static display which turned out to be cancelled. This gave me time to try flying again with a rudder trim tab in place of the clay which should be a lighter solution. 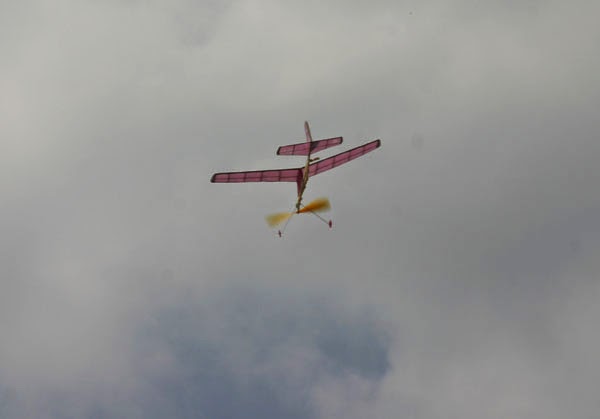 By this time my window of opportunity for good flying conditions has closed and it was much too windy to fly. That did not stop me from trying, to start with I had too large of rudder trim tab and the airplane did a spiral dive from launch. I removed some of the balsa tab and got one flight where it did fly a reasonable circular flight. By now it was really getting windy, the airplane would just point straight into the wind and hover or it would turn and go shooting downwind.

The last flight it went downwind towards a small pond, I watched carefully to get a good line of sight as the plane went down over the bank of the small pond. This a a brushy area and I had lost a glider there last year because I did not watch closely enough where the airplane had landed.  It did not take too much looking this time and I spotted the airplane just a couple of feet from the water's edge.


I am slowly learning when not to push my luck and stop flying before I lose a model. It is also apparent further trim flights should be done under calmer conditions.

The first Cloud Buster I had built I reviewed on the Endless Lift blog, a second was built to try to build it lighter. I had drilled holes in the wing ribs but the weight savings was really pretty small, also a larger diameter propeller was used. Another day I plan to compare the flight of the two airplanes.

Why I Still Fly Wind Up Airplanes

Having not really learned my lesson  I flew the Cloud Buster in wind, it landed by water at the bottom of a  steep bank. I managed to climb down to get it without falling in, I did leave my cellphone on top in case I did slide in. The dirt that started falling down the bank which broke the stab off.

With that much luck I decided to fly the other plane but I moved farther upwind. 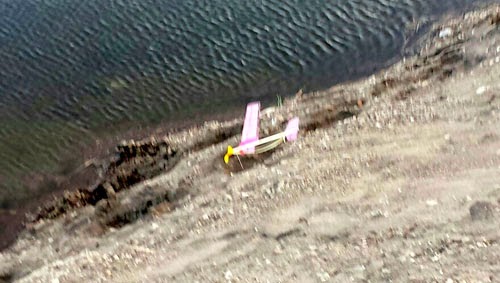 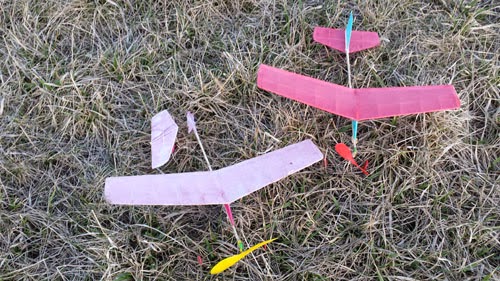 The wind was started to slow but the sun was going down also.

Posted by Scienceguyorg at 7:33 AM No comments:

I set an alarm to view the astronomical event known as the "Blood Moon" or "Hunter's Moon" because several weeks ago the topic had come up with a group of guys I have coffee with. The person that started the discussion talked mainly about the connection between the occurrence of this lunar event and events in history.


Wayne Diercks a relative who is in the group will often further research topics from the gab sessions using the Internet. The next week he brought in the story of how Christopher Columbus used his knowledge of an upcoming Blood Moon to scare the native people where he and his men were to give them food.


The religious connections to the Blood Moon relate this phenomenon to the end times or the return of Jesus. For people of the Jewish faith this cycle of four Blood Moon's known as a " tetrad" coincides with  religiously significant dates.

What Causes the Red Color?

The sunset red glow that circles the Earth as it blocks the light from the sun is cast upon the moon when the paths of the Earth and Moon are lined up. This would be a monthly event except the the Moon's orbit is inclined about 5 degrees to the Earth's orbit. From 1600 to 1900 the tetrad of eclipses did not happen at all. In the 21st century this is a more common event with nine sets of tetrads.  The next three will happen on:

Posted by Scienceguyorg at 8:03 AM No comments:

The Math of the Viral Sharing

After the large number of views to my new website article Simple Aerodynamics With a Lesson in one day, I thought I would examine the Likes and the shares to better understand how the views had spread. When the Academy of Model Aeronautics had posted a share to their Facebook page it started a large base to spread from. With 21,234 Likes to there page, 40 shares to my article were made with 115 Likes. 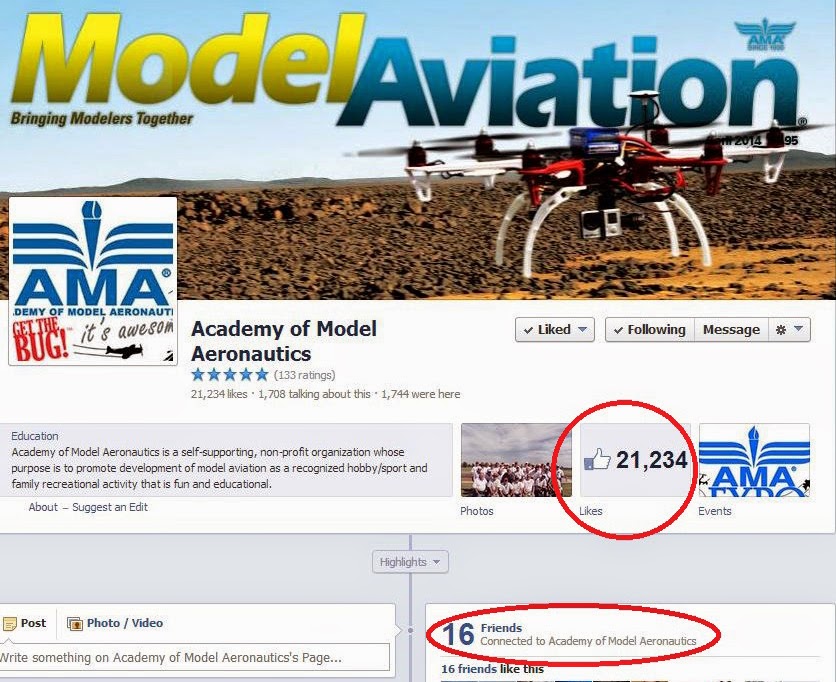 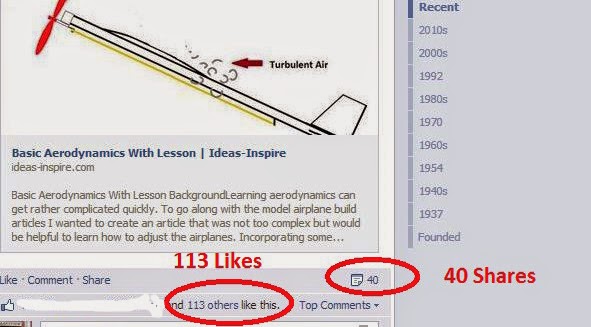 The article also was posted to a Facebook group that I am a member of RC Soaring and Sailplane Society and had  19 Likes.  This is just one group I know it was posted to, there could be more. There were some nice comments as well. 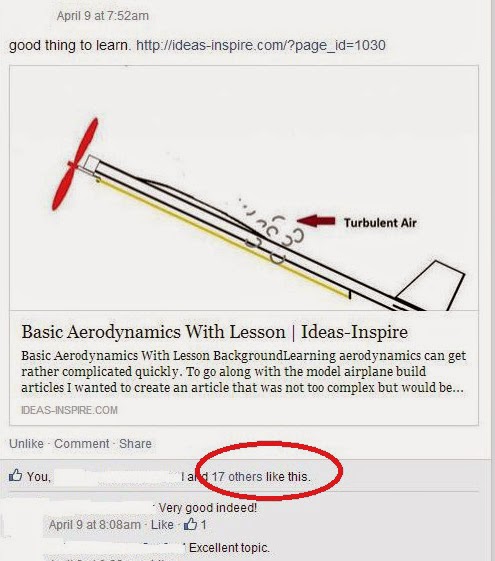 My knowledge of social media marketing is rather limited, there are many people that do this as a career. I do see the possibilities.

Previous Article on the Article Sharing


Posted by Scienceguyorg at 8:46 AM 2 comments:

Google defines viral as "an image, video, advertisement, etc., that is circulated rapidly on the Internet." A webpage that I have been working on spread very quickly yesterday due mainly to shares on Facebook. My web statistics showed 900 pageviews in a single day which I think was very good. 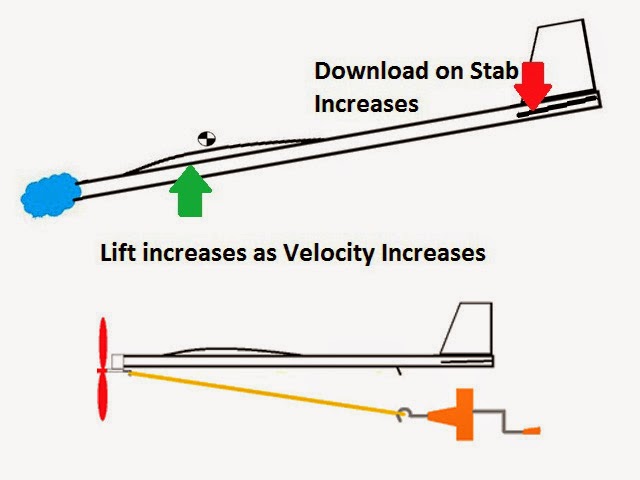 This article was a big effort and I am not satisfied that it is complete.  Some aspects of aerodynamics seem to not be set in stone yet as a discussion of these topics can start a heated debate. I could give examples of this but I think I will spare everyone the drama. 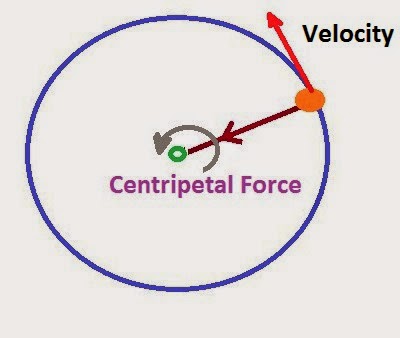 The article consists entirely of drawings that I had done in the Paint program included with Windows, I am no artist but I think the drawings turned out fairly well. My hope with the drawings is that this will be easier to read and cheaper to print.  I might have to create a PDF version also as different web browsers print differently, often the text is way too small. 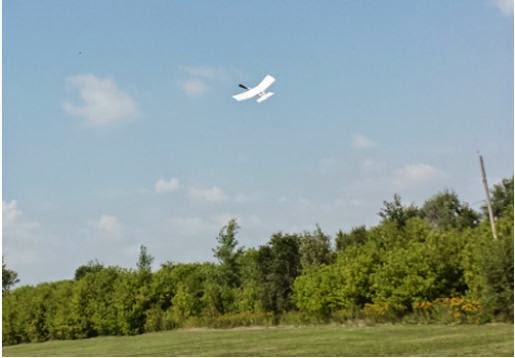 This article is also my attempt to move beyond a strictly how-to-build project article to an article that introduces math and physics. There are several math problems in this article that appear in orange text. It is my hope also that a complete lesson plan could be created by using the construction article for foam gliders and rubber powered foam airplanes from the website and combining with the aerodynamics.


Posted by Scienceguyorg at 8:48 AM No comments: