The more I build and fly free flight model airplanes, the more it appears that the models may have personalities like humans or animals do, that is characteristics that make each one somewhat unique.  Ultimately there has to be reasons based on design, trim adjustments, and accuracy in construction for the flight characteristics.   Some models appear to have a preference to turn one direction over the other in flight, trying to change that may not be easy.  With the smaller models it appears that the freewheeling propeller can change the direction of the glide either right or left. On my electric Sniffer model which has always had a preference to glide to the left I did some glides from a small hill with the propeller removed and the plane repeatedly glided straight.


This year my objectives are to build more accurate models, use methods to ensure nothing shifts in flight, and learn to adjust the models to perform in a consistent manner. I am guilty of wanting to get the airplane flying before finished with all of the little details such as keying the wing and stab so it cannot shift in flight.  I have also learned that changes in the thrust can make big differences in the flight pattern, example is with electric, some of the battery is used up rather quickly and the rpm drops, this could have a big effect on the flight power pattern if you keep flying without changing out the battery.

Recently I worked with adjusting my electric powered Sniffer free flight and think I made some real progress. To start with in the flying session I tried to force the plane to glide right and climb right with rudder tab. Too much right and it was not climbing, backed off on right rudder and the glide was too straight.

In desperation I put the rudder tab left, I was afraid the glide would be too much left but that appeared to be not the case. Now it climbed very consistent to the left and the glide was consistent left also. Flight after flight was darn near the same. I could let it get fairly high for the flying site and it would land close most of the time.

Ending this blog posts with some quotes about quirks of free flight models from people with a whole lot more knowledge and experience than myself:

“--FF models of all types suffer from the little girl with the curl syndrome. When they are good, they are very very good, but when they are bad they are horrid. You do what you have to do to make them fly--although the universal advice is make just one change at a time. Some models never survive the trimming process, and other models soldier on for years of flying.”

“Cabin sport models-of which the Sniffer is a typical example- frequently seem to prefer L-L trim. Personally I fly them the way they want to fly naturally-which is usually L-L.....occasionally I've had a cabin model that preferred going R-and very rarely-one that was happy turning either way without any particular preference.....some were even the same design! [Vic Smeed 'Tomboy' , 40" simplex and Modelair 'Hummingbird']......I think in practice it results from the subtle interaction of thrustline, cabin height and fin area....”

Posted by Scienceguyorg at 1:11 PM No comments:

Up until last year my free flight flying had been smaller rubber powered models such as the Peck Sky Bunny, AMA Maxi Jr., and a couple of scale type models such as Guillows Super Cub.

A couple of years ago I decided to try a free flight discus launched glider the  Maxima.  Even though I had launched RC discus gliders, I had a something to learn about launching and more critical adjusting the glider. It crashed many times in the beginning. As I got it dialed in better, the flights kept improving and I saw it circling upward in thermals fairly often.

To not lose it until the end of the flying season I was really lucky. It was stuck in a tree but blew down.  It completely flew over a bunch of trees and landed next to a road. Another time it flew over a small pond.  When I lost it the DT must have hung up and it circled for a long ways until over a cornfield.


I think it was the same year I had bought components for an e36 electric free flight from Texas Timers. Progress on a Pearl e202 model was really slow but before the end of the flying season I decided I would put the electric components in a Starduster ½ A free flight someone had given me.

Not knowing anything about powered free flight, it flew pretty well for me. Only one time did it crash, probably because the wing was not on straight or a bad launch.

The next season I finished up the Pearl e202 but with such a tiny flying site, I added RC equipment for rudder control. I really didn’t know what a proper test glide should look like and did not have enough decalage.  Even though I could steer, it still crashed without a way to give it up.  After repairs and getting the proper trim it flew good with only rudder control.

About this time I was going as a competitor to my first Nats in Muncie Indiana, I took the RC equipment off.  My thought was getting there a day early someone could help me get it adjusted.

As luck would have Jack Murphy parked right next to us, I had come with Dave Edmundson from Minnesota. Jack helped me and I got in some flights.

At the Nats I met so many super people, many I had only known from the Internet such as Dohrm Crawford. Dohrm helped me so much in getting my e36 flying. He borrowed a heat gun from someone and we straightened out the wing. On another day it made a very nice flight with over 10 second run.

For the competition day I launched it on a short run with a quick DT but the stab did not go up far enough, it just kept circling in a thermal for maybe a couple of minutes but it did come down on the edge of the field. Dohrm and Jim Jennings Jr. redid the DT system for me.

I met a bunch of people that I only knew through the Internet at the Nats, pictures of a few of them below.

At the Nats I had the chance meet many of the great glider flyers including the designer of my Dynomite TLG Stan Buddenhom. My performance was just okay, I was not patient waiting for good air.

My Dynomite DLG at 2016 Nats below 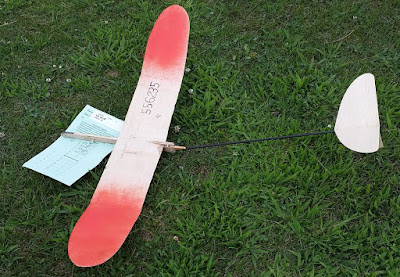 For 2017 I built several competition free flights and also experimented with other ideas.

A friend who flies RC sailplanes thought I might be more interested in some CO2 motors, so he sold them to me.  The first plane I put the motor in did not seem to have enough wing area but this plane climbs very easily. So much so I installed fuse DT system.

I purchased the BMJR Sniffer kit originally thinking I would try a glow powered free flight again because I had a couple of Cox PeeWee .020 engines. Researching the PeeWee 30 event that this plane would qualify for I realized it would not be a competitive airplane so decided I would install a small brushless electric motor and use RC equipment to control the motor speed and to be able to DT on demand. This way I could fly from a smaller field and bring the plane down whenever I wanted to. It is working well for that.

So much I have skipped through, look for video with many more images and video.

Posted by Scienceguyorg at 9:14 AM 2 comments:

My start in free flight model aviation was probably around seven years old with a simple rubber powered model and a hand launch glider. When I was around 10 years old started flying control line model airplanes. The largest of the control line models I still have, a Carl Goldberg Buster, powered by a Fox .35.


At 13 years old I started flying radio control with RC equipment outdated at the time known as "reeds". In another year I had a proportional radio, World Engines Blue Max. The first competition flying I did was RC pylon racing with .15 engines, known as quarter midgets. When I was in my early 20's my father and I built large model planes for 30 cc chainsaw engines.


I took about a 10 year break from model aviation but after learning to fly power RC airplanes again I wanted a new challenge so started flying RC sailplanes and simple free flight airplanes. Someone introduced me a to a local man that was flying indoor free flight, we became good friends and I flew some indoor free flight contests.

Where I live, finding a large enough field for higher performance free flight is tough, I stuck with simpler models and teaching kids to build model airplanes. With the student programs I expanded into other types of projects like; kites, water rockets, mousetrap cars, and windmills. The classes were through the local parks and recreation, College for Kids, and Everything Hobby in Rochester MN Fuel my Brain program. On a couple occasions I drove to Madison Wisconsin to teach after school program teachers. 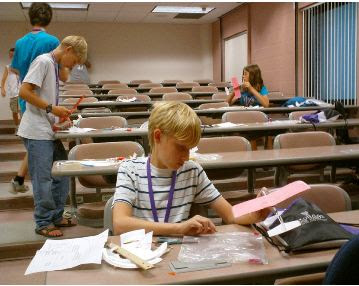 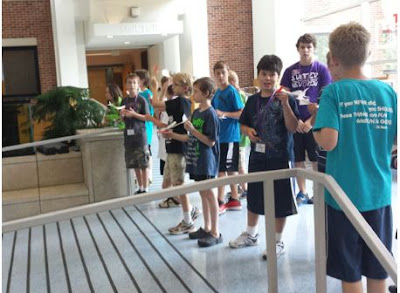 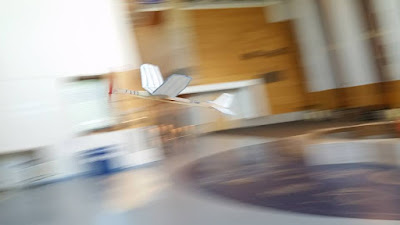 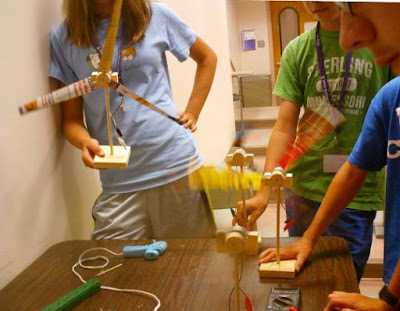 I started a website with my projects  that is now known as http://www.ideas-inspire.com.  I setup displays of my projects at local venues and one year at MN State Fair on STEM Day. One year I helped a student in Wright Stuff Science Olympiad in Menomonie Wisconsin. Another year I visited Stout university there to observe the STEPS program for girls when they built RC glider as part of the program.

I setup at public functions with my science projects and gave demonstrations on aviation history using my model airplanes at various locations.

One year I joined the Academy of Model Aeronautics at Nationals Science Teachers convention in Ohio.

For a couple of years I taught teachers for after school programs in Madison Wisconsin. One year building mousetrap cars and another year foam model airplanes. 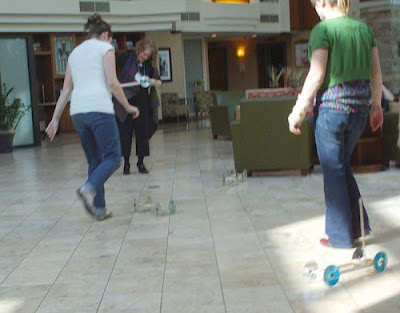 In my next blog post I will discuss getting more serious about competition free flight. I would like to also make a video of this with additional images and video clips.