I would like to think this article is not so much about my bass fishing experience but about matching my observations with research.  I am comparing snippets of this article “The Behavior and Habits of Largemouth Bass” by William K Johnke.

First of I want to state my observations from fishing from a small lake close to my home very often in the evening:

From the article I learned largemouth bass feed primarily from sensing vibration and sight.  The lures I most often use wiggle and/or disturb the surface. “They take full advantage of periods or areas of subdued light”, that is why I fish later evening until it is almost dark. “The overwhelming majority of bass will be found in that 10 percent of water”, this is why it is so important to find the best locations. “All bass beyond the smaller sizes (nine to thirteen inches in length and averaging a pound in weight) are basically deep-water fish”, no doubt why I catch so many small fish from shore. “Anything which even hints that his survival may be in jeopardy causes him to retreat hastily”, I find after one fish is caught in a spot that it scares other fish for a short time. Returning to that same spot several minutes later another will often be caught.

Posted by Scienceguyorg at 9:11 AM No comments:

I live in a small city with an abundance of opportunities for outdoor activities with a major river, small lakes, trout streams, and bluffs; but there is not much space for free flight model airplanes. In the past I flew simple free flight models that would not be much of a loss if lost. A few years ago I became interested in outdoor competition free flight but I had to travel fairly far to fly the models.

I have tried to think of ways that I could fly the free flight models from a smaller site.  On the first e36 I built I installed RC with rudder control only, used the electronic timer for motor cutoff. The idea being I could fly it in small flying site and then would remove the RC when I could get to a larger flying site. Being completely inexperienced I did not have enough in decalage and crashed, should have used the RC for motor speed also so the power could have been cut;  or worked my way up through really short motor runs.  With enough decalage  it flew fine.  I took the RC off and had help trimming it at 2016 Nats. 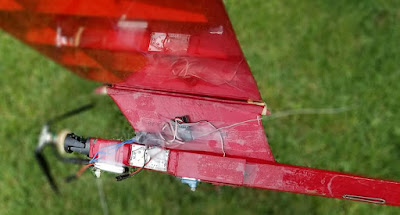 My next attempt to build a free flight model for small field was to build a Sniffer with electric motor and RC controlling the motor speed and DT. This worked pretty well in trimming the model out as I could start with low power and cut power immediately if the model appeared to be in trouble.  To work on the transition I could ease off the motor speed at the top of the climb. When adjusted properly I would use full speed and cut off like a normal power free flight.  If it was really calm I took it up fairly high and it would stay flying over the small area.  Using the RDT function I found it was often hard to judge where it was over. There are numerous obstacles on this field and one time when I did a remote DT it landed in a chain link fence, luckily no damage.  Flying this at a somewhat larger field it worked great.

From the small field I find I can test the climb of E36 models for about 5 seconds and set for quick DT, maybe could go to 10 seconds but models can drift while DT’ed.  I test rubber models for very initial trim by only winding to a hundred turns.  I put RC and electric motor on Satellite 320 that I was struggling to trim on glow.  This was great at bigger site but was gliding too close to edge of the field in a hurry. 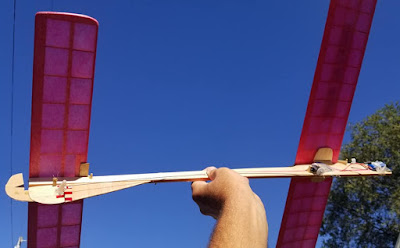 My latest temporary RC on a free flight was to add rudder control on a Lil Dip towline glider. To start with I have been using a hi-start based on 1/8” rubber.  I was able to get the stab incidence set for a good glide. If it started stalling I would use rudder control to turn the plane enough to stop the stalling. With more flights,  I would launch the glider and not touch the RC at all as it climbed up and off the hi-start. As it glided around the field I would try to use the RC as little as possible but the unaided glide time has been pretty short so far.  In the future I want to try setting trim lever for a gentle circle and see if can stay over field longer.

Bottom line is this is better than not flying at all but not really free flight.  It might be helpful in learning to trim out planes without crashing but that should not be an issue to a more experienced free flighter. I still plan to pursue this more and will write again.


Posted by Scienceguyorg at 9:36 AM No comments: