Phantom Flash - Learning From My Mistake

Just completed a Phantom Flash rubber powered free flight from a kit sold by Volare Products with laser-cut parts. The kit is excellent but I think I lost the wing hold down rubber band and substituted a different rubber band. The Phantom Flash is a classic 1937 design by Joe Konefes and was a Comet Kit at one time, the plans can be easily found on the Internet for download. It was my introduction to indoor rubber power flying, my friend Floyd Richards gave me a copy of the plans and had me order really light balsa. The plane flew very well but I had trouble with ground looping for ROG take off. 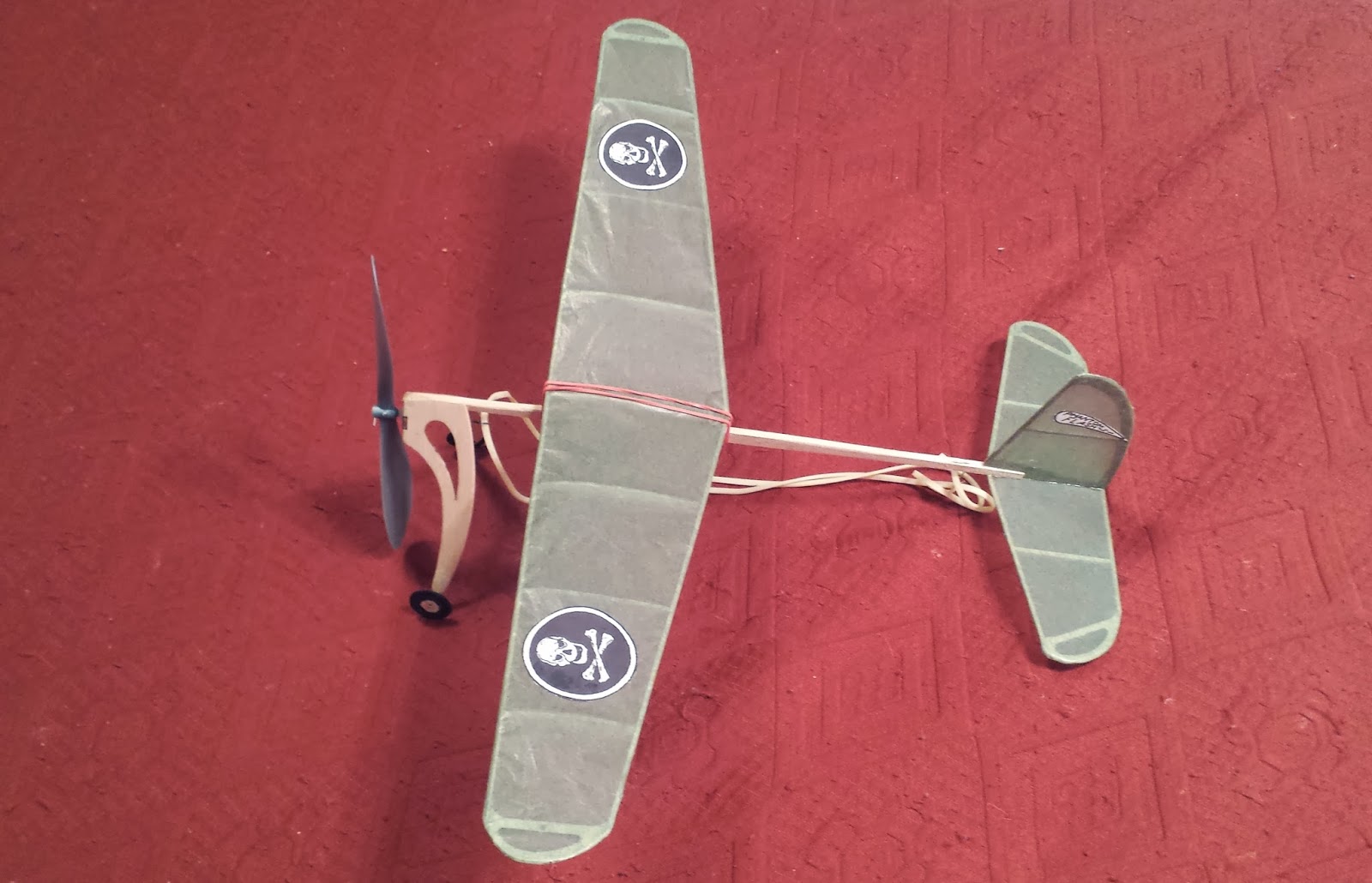 It was fairly warm this past weekend for late November so I did test flight on my newly completed Phantom Flash. At times the wind was gusty and the ground was very hard but the chance to try out a new plane is always a thrill to me. First flight started fine but plane turned too much to the right and went into the ground rather hard. The plane appeared to be constructed straight so I was puzzled to why there was so much turn, the climb was rather erratic also. Sometimes too much up and other times not enough, on closer inspection I noticed the wing was angled too much one way. The rubber band I had used was not holding it down with enough force allowing the wing to shift which is why the plane would change trim. This was my fault in that I had lost the rubber band that came with the kit and substituted another one, I do not think this one had enough tension.

The plane also needed the wing ahead slightly farther for center of gravity balance but moving it ahead too far the motor stick was angled down which created less positive incidence. For a temporary fix I shimmed up the front wing support and I wedged part of the rubber band into the rear wing support.  Now I was getting good flights but the balsa landing gear had taken a heavy toll, I just kept flying. If I had the wing fastened securely from the start flights would have been better and the landing gear might have been fine. On the other hand maybe using all wire landing gear is a better idea but then that would destroy the nostalgic look.

Important Note:
It has been suggested the balsa landing gear be reinforced by covering with tissue. Some people have used thin carbon strips for reinforcement also. Another suggestion is to make wire loop in the landing gear to absorb the shock.


Bill Kuhl
Embrace the Challenge
Posted by Scienceguyorg at 7:56 AM